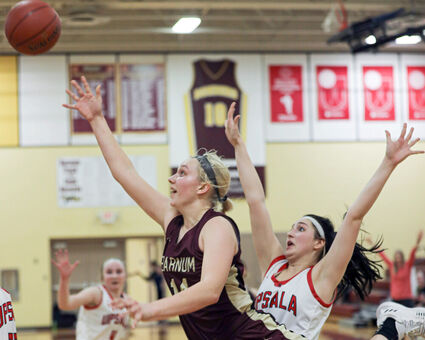 Barnum's Rayna Klejeski scores the game-winning basket at the buzzer during Thursday's Section 5A playoff game with Upsala. Klejeski also hit the 1,000 career points mark during the Bombers' 53-51 win.

Barnum junior Rayna Klejeski had a big night last Thursday in the section 5A playoffs: not only did she score the 1,000th point of her career, she also hit the game-winning basket as the Bombers defeated Upsala 53-51 to advance to the sectional quarterfinals.

"It was so exciting to hit the thousand-point mark," Klejeski said. "I look up in the gym and see all the 1,000-point scorers for Barnum over the years and now I get my name there as well. It's an awesome feeling."

Klejeski hit 1,000 right before halftime, when she cut the Cardinals' lead to two points at 27-25.

The Barnum junior said she loves the game of basketball, her teammates and her coaches and "works hard" at a game she "loves."

Trailing Upsala by two points after one half, the Bombers rallied. With the game tied at 51, Klejeski hit the game-winning shot on a layup at the buzzer to help Barnum advance to a quarterfinal contest with Braham.

Klejeski finished with 18 points to lead all scorers on the night. Her teammate Allison Marine finished with 16 points, while Jacinda Wright added 9 points in the win including two three-pointers. Kristina Beniek led the Cardinals with 17 in the loss.

With the win over Upsala Thursday, the Bombers faced Braham in a battle of the Bombers Saturday afternoon in Hinckley. Barnum had defeated Braham 58-57 just nine days prior to facing them in the sectional playoffs.

"We played a good game against them the first time and it was a great win," said Bombers head coach Mariah Minkkinen. "They played without one of their top players and we knew they would be ready for us in the rematch."

With Braham back at full strength, they broke the game open midway through the first half, taking a 22-14 lead into the break.

Braham used its quickness and good ball movement to overcome Barnum's distinct height advantage. Several Barnum unforced turnovers, along with good low post defense helped build the Braham lead to as many as 18 points in the second half, despite the defense that Barnum worked hard on in the second half.

"I am very proud of how they worked hard on the defensive end, when we were struggling on the offensive side," Minkkinen said. "I was very proud of how Janaya Jurek handled the Braham press all game, for being a freshman and the hard work she put in all season long she got better and better all year."

Braham's solid defense held Klejeski and Marine to eight first half points and 22 for the game, well below the combined average for the two. Barnum did a better job in the second half at working the ball inside to Marine and Klejeski, but Braham's Madison Davis and Arin Zimple used speed and quickness to drive and dish for uncontested layups. The lead was too much for Barnum to overcome as they fell 47-30.

Klejeski led Barnum with 16 points while Anessa Davis, and Marine each ended with 6 points in the loss. After hitting 6 three-pointers against Upsala, Barnum scored only one against Braham, finishing 1-10 from beyond the arc.

Madison Davis and Zimple finished with 18 and 16 points respectively for Braham, which faced Ogilvie in the section semi-finals. 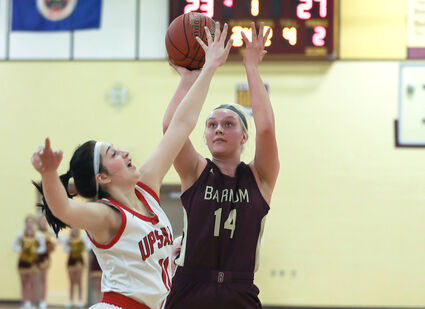 Rayna Klejeski led all scorers with 18 points for the Bombers.

The Bombers ended the season with a record of 13-15.

"Even though we lost, I hope this game will motivate the girls to put in the work during the off season and continue to get better," Minkkinen said.

Klejeski and her teammates attended open gym Sunday in what was referred to as the first practice for the next season.

"Nobody wants the season to end," Klejeski said, "but we are young and looking forward to next year. It was great to have the girls at the open gym."

Klejeski will be busy between now and then. She will be playing AAU basketball starting in a few weeks, working, raising and riding her horses and spending long hours in the gym getting ready for what the young Bomber squad hopes will be an exciting next season.