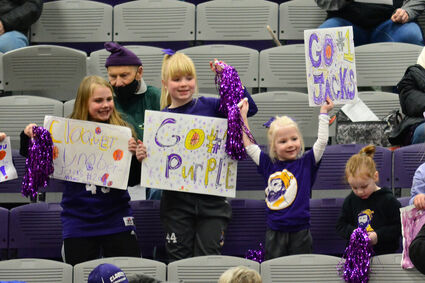 Young fans cheer for the Lumberjacks girls basketball team Friday night in the playoffs. They'll have a chance to cheer on the boys team tonight as its playoff run begins.

The 7A tourney opened on Monday, when No. 16 Carlton opened against Bigfork, the No. 17 seed. The Bulldogs had a great first half and doubled up on the Huskies 34-17 at the break and went on to a 70-55 win.

By virtue of their win on Monday the Bulldogs will now get to play the No. 1 seed Cherry Thursday, which finished with a 22-4 record in the regular season.

Local teams which will also see action on Thursday after receiving opening round byes include:

-No. 8 South Ridge vs. No. 9 Nashwauk-Keewatin. The Panthers enter the tournament with a record of 14-9.

-The Fond du Lac Ogichida are seeded 12th and will play at No. 5 seed Duluth Marshall. FDL enters the tournament with a 7-16 record.

-The Wrenshall Wrens finished the regular season with a record of 12-12 and picked up the No. 11 seed and will take the court in Chisholm.

All the teams that win on Thursday will move to the quarterfinal round on Saturday at the University of Minnesota Duluth.

Esko and Moose Lake/Willow River are the lone local schools in 7AA vying for state tournament berths. Esko had an impressive regular season, going 22-3 and locking up the No. 1 seed. The Rebels also had a strong year and finished with a 17-8 record, which was good enough for the No. 3 seed.

Should Esko and Moose Lake/Willow River win, they would move into the quarterfinal round Saturday in Hermantown. The 7AA tournament will move to UMD Tuesday with the championship game set for Thursday at UMD.

Cloquet received the No. 4 seed in the six-team Section 7AAA tournament. The Lumberjacks will open play on Friday at home against No. 5 seed Grand Rapids, a team Cloquet beat twice during the season. A win by the 'Jacks on Friday moves them into a game at No. 1 seed Hibbing. Should Cloquet win, it would play for the title at Duluth East next Thursday.