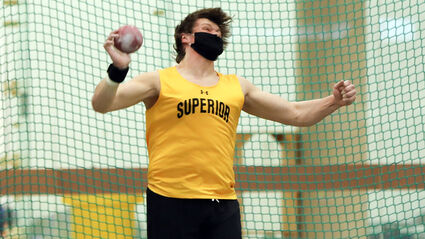 University of Wisconsin Superior's Gage Stankiewicz, a first-year student from Esko, is headed to the NCAA championships in the shot put.

University of Wisconsin-Superior thrower Gage Stankiewicz, a 2021 graduate of Esko, is headed for the 2022 NCAA Division III Indoor Track and Field Championships in the shot put, the NCAA announced Sunday.

Stankiewicz will compete in Winston-Salem, North Carolina, with the preliminary round beginning at 1 p.m. Saturday.

Stankiewicz, a prolific high school star, is ranked 12th in NCAA Division III in the shot put after bettering his personal record at the NCAA Final Qualifier on Saturday, where he had a throw of 16.07 meters.

Stankiewicz was named Upper Midwest Athletic Conference indoor track and field Rookie of the Year and Field Athlete of the Meet in helping the Yellowjackets to their sixth conference championship on Feb. 25-26.

Stankiewicz is UWS head coach Glen Drexler's ninth student-athlete to qualify for the men's and women's indoor championships since taking the helm of the program 12 seasons ago.