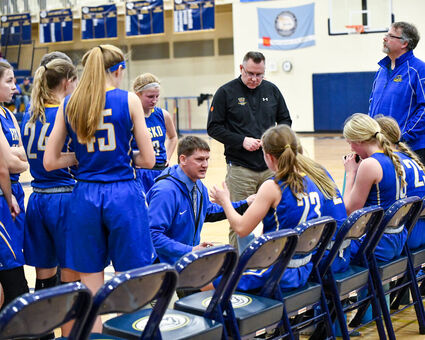 Esko coach Scott Antonutti goes over the game plan Monday in a close win against Virginia Monday. The team advanced to a section semifinal Wednesday.

The Esko girls advanced to the Section 7AA girls semifinals following a 47-43 win over Virginia Monday night in Hermantown.

Last Thursday, the Eskomos advanced through the second round of the tournament by downing Hinckley-Finlayson 79-31. Twelve Eskomos scored in the win over Hinckley-Finlayson as Jayden Karppinen led the scoring attack with 34 points. Kyra Johnson was the only other Eskomo in double-digit scoring with 12 points.

Things proved to be a bit more difficult on Monday, when the Eskomos faced the Blue Devils in the quarterfinals in Hermantown. Ultimately, the Eskomos rode the scoring touch of Karppinen and solid team defense to a narrow 47-43 win and a spot in the semifinal round on Wednesday night, played after this issue of the Pine Knot News went to press.

Early in December, the Eskomos beat the Blue Devils by eight points on the road so the closeness of the contest came as no surprise to Esko coach Scott Antonutti.

"I think Virginia has been playing exceptionally well at both ends of the court," Antonutti said. "We didn't shoot particularly well as a team, and that's how you lose at this point in the playoffs. Considering we weren't very efficient on the offensive end, it was important that we played good defense."

The longer the game stayed tight, the more Esko fans flashed back to a year ago when Virginia beat the Eskomos on their home court.

"They beat us at home last year in a game that I thought we should have won, but didn't shoot well that night either," Antonutti said.

Despite the close win, Antonutti is just happy his team is moving on to play another game.

"At this point of the season it's about winning and advancing," said Antonutti. "I won't spend time watching the game film or coming up with a list of things to improve on to share with the girls. The importance of looking forward to the next game and game plan for everyone on the team supersedes a lot of game reflection at this point. I'm glad we advanced and hoping we feel prepared and ready for Wednesday." 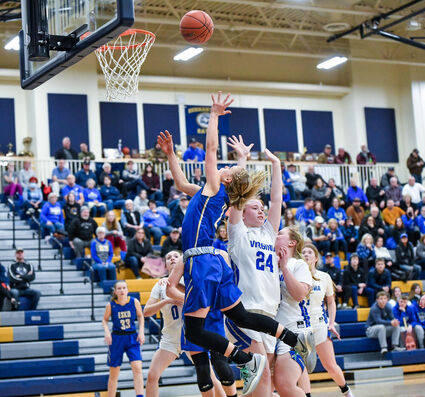 On Wednesday Esko was slated to face Pierz, a team it lost to 66-63 in the third game of the season. Pierz defeated Crosby-Ironton 59-52 Monday night. Pierz is the No. 3 seed. The other semifinal game will feature No. 1 Pequot Lakes vs. No. 4 seed Proctor. Pequot Lakes defeated Mesabi East 70-34 last Saturday and Proctor downed Duluth Marshall, also on Saturday, 62-48.

In other Section 7AA tournament news, the Moose Lake/Willow River Rebels had their season come to an end in a loss to Crosby-Ironton by a score of 73-63. Crosby-Ironton was the No. 6 seed and the Rebels were the No. 12 seed. The Rebels struggled to find a way to stop Tori Oehrlein and Mya Decent. Oehrlein poured in 36 points and Decent recorded 18 points in the second-round win.