Mojakka cookoff serves bellies and a good cause 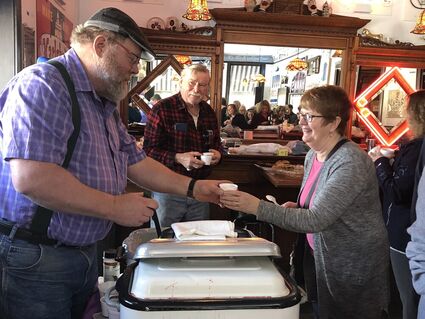 Ken Peter serves some of his Finnish salmon soup, or lohikeitto, during Sunday's Mojakka Cookoff at the Northeastern Saloon and Grille. Peter won first place for his soup, and the event raised more than $1,000 for the Carlton County Historical Society.

There have been two staples in the annual mojakka cookoff over the past 16 years: the meal (soup) and the location (the Northeastern Saloon and Grille).

The beneficiaries of the annual fundraiser have changed, from the Friends of Animals, to the American Legion and now the Carlton County Historical Society. But many in the crowd return every year - it was standing room only at times Sunday - to carefully taste and judge the various soups before they voted for their favorite.

Mojakka can range from a thin soup to something approaching stew and contain whatever whatever might be on hand. There is no ideal recipe, although there are some ingredients that can make the difference between a "lihamojakka" (LEE-ha-moy-a-kah) and just a beef and vegetable soup.

Allspice is key, said Anja Bottila. She likes to wrap her whole allspice in cheesecloth, rather than having it float around in the broth.

"It's what gives the soup flavor," said her father, Roger.

Bottila used her mother Mirian's recipe, to make several gallons of lihamojakka for Sunday's cookoff, and took third place for her efforts.

"Sometimes I just come to enjoy, but now that I'm working with the historical society, I thought I'd better make some," Bottila said.

Not every mojakka is made with beef. Another version, made with fish in a creamy, allspice-flavored broth, is commonly referred to as "kalamojakka" (KAH-la-moy-a-kah). And then there's Finnish salmon soup, or lohikeitto.

Purple was a popular color Sunday. Peter was wearing a purple button-up shirt, while Bottila was modeling (and selling) a purple T-shirt that read, in Finnish of course, "Grasshopper, grasshopper, go away from here," in a reference to St. Urho's Day on March 16. 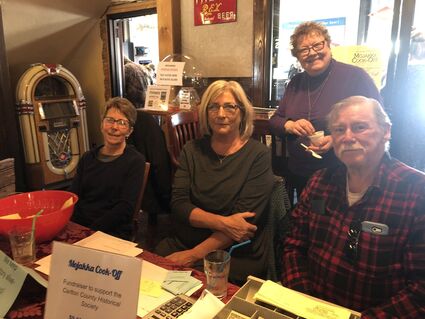 Carlton County Historical Society benefitted from this year's Mojakka cookoff and worked with the Northeastern Saloon and Grille to make it happen again.

The made-in-America Finnish holiday celebrates the fictional St. Urho ridding Finland of a scourge of grasshoppers, and the Northeastern was selling purple beer to celebrate the occasion, although patrons could also choose to have green food coloring added to their draft beer if they prefered to toast St. Patrick.

Chad Mackey mused over his own memories of mojakka, which was always made with beef when he was growing up. He was shocked when his former father-in-law told him that he considered the most traditional mojakka to be fish-based.

"Then I realized my grandparents lived on a farm, and he grew up near a lake," Mackey said. "I guess it all just depends on what you have on hand."

Susan Zmyslony, director of the CCHS board, estimated more than 130 people attended and raised more than $1,000 for the historical society. On top of that, it was fun, she said. "It was a very enjoyable afternoon with lots of friendly conversations and reminiscing of the history of our area."