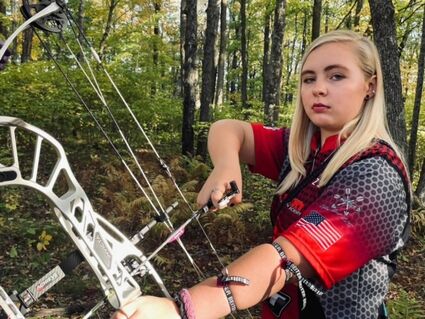 Cloquet High School senior Izzy Burley has traveled the country competing as a compound archer for years, is ranked nationally, and will compete on the Mount Marty University team in college next year, on a scholarship.

Izzy Burley may be the only Cloquet High School student ever to get a college scholarship for archery, said activities director Paul Riess.

The CHS senior signed a commitment letter to go to Mount Marty University in South Dakota to compete on its archery team on Friday, something her parents never saw coming when she got her first compound bow at the age of 6.

Her mother, Aimee Burley, said it's been "a wild ride."

"We knew they had some potential, but we had no idea how far they would go," she said, referring to Izzy (short for Isabelle) and her sisters. "And archery is a lifetime sport, so their journey is just beginning."

It's grown into a family sport since Izzy and her older sister started archery through a local 4-H club. Back then her parents didn't know what was out there in terms of archery. Now her dad, Jason, is a USA Archery and 4-H coach and both her parents plan to start competing themselves.

But Izzy and her 16-year-old sister, LeeAna, are the archery stars in the family at this point. They have traveled to 26 states with their parents to compete as compound archers. Izzy holds half a dozen state records and has also done very well nationally.

After numerous tournaments in 2020, Izzy ended up ranked No. 6 in the country in the cadet women category for ages 15-17. That year she was only one point away from making the national USA Archery Team. In 2021, in her first year competing in the junior women category, she ended the season ranked No. 9 in the country.

On Wednesday, USA Archery named her to its Regional Elite Development (RED) Program for 2022.

"Athletes selected for this program are among the country's most talented up-and-coming youth archers," noted the press release. "They are dedicated to pursuing their dream to represent Team USA Archery on the world stage. RED archers have access to top-tier coaches from across the nation and resources to help make their dreams become reality."

Burley competes with a compound bow rather than the more traditional recurve bow - think Robin Hood style stick and string for the recurve versus the gears, cams and more strings on a compound bow.

They compete indoors and outdoors, when the weather is right. They shoot at the traditional circle targets, but also targets with two-dimensional animals drawn on them or three-dimensional foam targets. One thing she doesn't shoot is animals. "I'm too much of an animal lover to hunt," she said.

At home, Izzy practices in the family's large garage during the winter, and used to shoot down the driveway in warmer weather. At the end of last summer they set up an "archery field" on their Carlton property. "It goes all the way to 70 meters in a couple spots," she said.

Izzy and her sister are both part of the North Central Elite Archers team, which draws young archers from Minnesota, Wisconsin, Montana, Colorado, the Dakotas and several other states.

"I think there are about 50 of us on the team now," she said. "We have camps together. We have great coaches and great friends on the team." 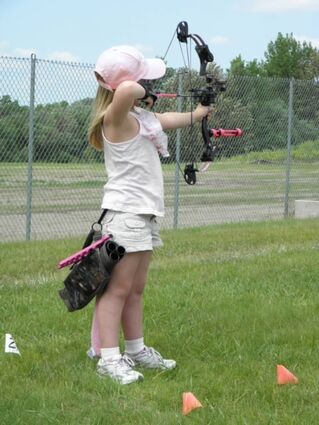 Izzy Burley started archery when she was 6 years old.

The "friends" part of the equation was the final factor in Burley's decision to compete at the collegiate level. Initially, she thought she might take a break from competition. Still, she applied and was accepted to Mount Marty University, and got an academic scholarship. Then her dad reached out to the coach there, and she was also offered an archery scholarship. The fact that she has two friends already on the team and another joining next year clinched the deal, along with the idea of having less college debt.

"It will be a similar competition schedule but fun to compete and travel with friends," she said.

Burley plans to get a degree in secondary education (teaching math) and maybe an art degree after that.

The South Dakota college is one of 20 colleges and universities in the country that offer collegiate archery scholarships, and there are many more schools with archery clubs that give students an opportunity to compete at a higher level.