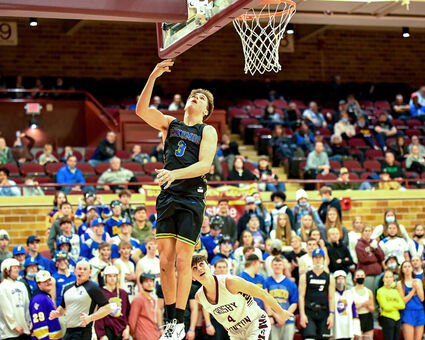 Koi Perich ended up with 40 points against Crosby-Ironton Tuesday as Esko advanced to the 7AA section final.

The Esko Eskomos boys basketball team entered Tuesday night's Section 7AA semifinal matchup with Crosby-Ironton with a 24-3 record and an eight-game win streak. The Eskomos left with a nine-game win streak, another victory in the win column and a shot at the section title on Thursday.

The 80-59 win over Crosby-Ironton at UMD was fast-paced and rugged with both teams running and gunning at a frenetic pace. Midway through the first half, the Eskomos were in a tight battle with the Rangers with Esko leading by one point at 15-14, but a series of plays - including a three-pointer by Cuinn Berger and Brett Lillo's fantastic saving a long pass resulting in another basket by Berger - put the Eskomos up 25-14 as they slowly pulled away to a 47-34 halftime lead.

"We started a little sluggish at the beginning of the game," said Esko coach Derek Anderson. "We started to crank up the defensive pressure after a few minutes and we got some turnovers and the guys got things going and into a nice rhythm."

Koi Perich, who ended up with 40 points for the game, had a stellar first half with 20 points. He was also a disruptive force on defense and on the boards.

"I think that because we hit so many three-pointers in the previous game that they had to respect that a bit and that opened things up for Koi," Anderson said. "He just kept attacking the basket all night long."

The Rangers came out and knocked down two quick baskets by center Jordan Oehrlein to begin the second half and cut the gap to 47-38, but Esko responded by going on another run to pull away with the win and play for the section championship Thursday night.

"We forced a couple of shots to start that second half," Anderson said. "They went inside and got a couple of easy baskets, so we had to talk about it with the guys and then we settled back in and played our game."

To make the semifinals, the Eskomos, the No.1 seed in the tournament, had to get by No. 9 seed Pierz. Esko demolished the Pioneers 103-53 Saturday afternoon in Hermantown. The win featured a school-record 21 three-pointers for the Eskomos as 10 players made the score sheet.

"It was one of those games where Pierz decided they were going to pack it in and play a 1-2-2 zone and try and take Koi (Perich) out of the game offensively," Anderson said. "That left the three-point line open and our guys were just on fire and the shots just kept falling."

Cuinn Berger and Dalton Spindler were hot, with Berger going off for 28 points and Spindler 24 points. Spindler hit seven long-range bombs and Berger added six three-point shots to lead the onslaught of baskets from beyond the arc. 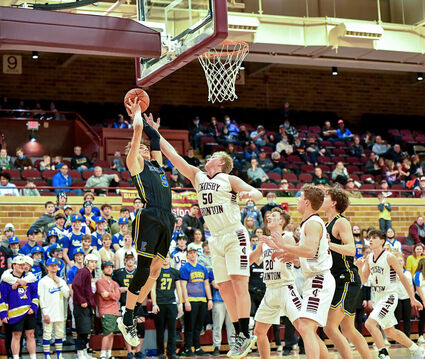 Mason Perich goes up for a jump shot against Crosby-Ironton Tuesday.

"I told the team prior to the game that teams are going to have to do things differently to try and stop Koi, who has reached a whole different level and is a tough match athletically for other teams," Anderson said. "Our guys came out and were ready to show what they can do. It was fun to watch."

Esko played Pequot Lakes in the 7AA Championship game Thursday night (March 17) at UMD and lost 58-50 in a surprising upset. Read that story in next week's Pine Knot News.