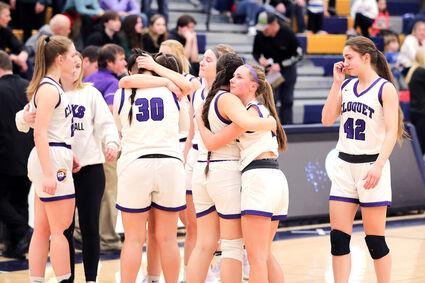 Cloquet teamates console each other after losing in the Section 7AAA championship game against Grand Rapids Thursday in Hermantown.

The Cloquet girls basketball team knew they would need to play their best game of the season last Thursday in the Section 7AAA championship game against Grand Rapids. The Thunderhawks had already beaten the Lumberjacks twice during the regular season, so the challenge was set. Despite a strong first half, Cloquet fell 51-39 as Grand Rapids punched their ticket to the state tournament.

"Through the first half we were pretty even with them," said Cloquet coach Heather Young. "We talked about some adjustments at halftime, but they came out and hit some key shots right away in the second half and we struggled to make some shots and ended up digging ourselves a hole."

At halftime the 'Jacks were within 24-21, but the Thunderhawks came out and built a double-digit lead quickly in the second half, led by Taryn Hamling.

"Hamling is just a pure shooter and she is so hard to guard," Young said. "We could have a defender all over her, but she still has the ability to make shots that most girls can't. About the only way to keep her from scoring is to not let her get the ball. She is a tremendous athlete."

Hamling led all scorers with 19 points and was joined in double-digit scoring by Jessica Lofstrom with 17 points and Braya LaPlant with 10.

"We had some good looks and we actually took more shots than them, but we just couldn't get the shots to drop," Young said.

Cloquet was led in scoring by Alexa Snesrud with 11 points. The junior also played well on defense and rebounding. 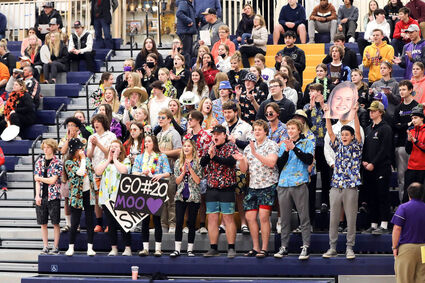 "We couldn't take her off the floor because she played so well," Young said of Snesrud. "They did a good job of defending Maddie (Young), our leading scorer, and we just couldn't overcome their defense and missing our own shots."

The 'Jacks finished the season with a 20-8 record.

"I am just so proud of this group of girls," said coach Young. "They fought all year. They put us back on the basketball map and they deserve a lot of credit for what they accomplished."