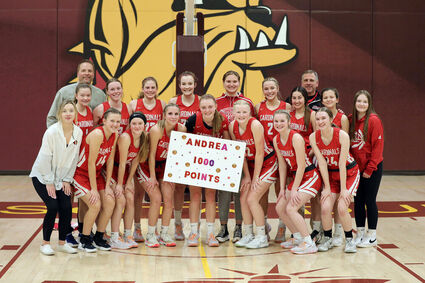 The Cromwell-Wright girls basketball team worked all season to get a chance to play in the Section 7A championship game Friday and a shot at Mountain Iron-Buhl. Midway through the first half, the Cardinals were keeping up with the top Class A team in the state, but eventually turnovers and strong defensive play gave the Rangers a 63-26 victory.

"We knew going in it was going to be a tall task," said Cards coach Jeff Gronner. "We knew we had to play well and for the first 12 minutes of the game we were hanging in there with them, but then we had some unforced turnovers and that allowed them to get some easier buckets."

Cromwell held a 6-2 lead early in the first quarter. Nine minutes into the affair they were down by a point, but then the turnovers started and the Rangers began an offensive onslaught. MIB allowed only 9 first-half points for the Cards, who trailed 34-9 at halftime.

"They are so good on defense," said Gronner. "We tried to slow the game down and get them into a half-court game, but they got hot and their defense got turnovers and that was enough for them to pull away for the win." 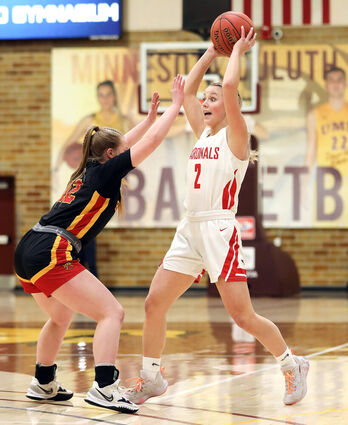 Cromwell freshman point guard Siiena Anderson looks for an open teammate against the defense of Mountain Iron-Buhl's Sage Ganyo during Friday night's Section 7A championship game at the University of Minnesota Duluth.

Pocernich was the only senior on the floor for Cromwell-Wright after NataLee Hakamaki suffered a season-ending knee injury earlier. On a brighter note, Pocernich marked 1,000 points in the Cardinals' semi-final game against Ely last Wednesday.

Coach Gronner was happy with the season, and not exactly surprised by the loss to MIB.

"It's tough when you only score 26 points, but defensively our girls played very well," Gronner said. "Overall it was a good year. Our goal was to get to the section finals with a chance to play MIB and see what we could do, and we accomplished that. A lot of young girls got a lot of playing time for us, so that will help us, as they gained valuable experience."

The Cards finish the season with a 22-6 record.