Tradition holds at the Hi-Hat 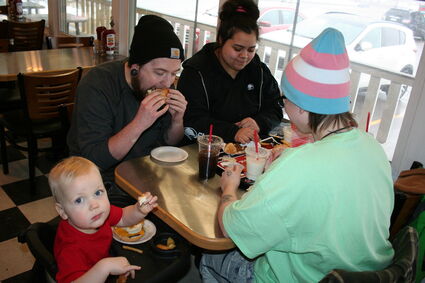 Jason Prokosch, left, Shaela Henderson, Logan Henderson and toddler Liam Henderson eat at a table at Gordy's Hi-Hat Wednesday. Jason and Shaela said they go to the Cloquet landmark about 10 times a season.

For the first time in three years of pandemic pandemonium, Gordy's Hi-Hat opened with counter service, with nary a carhop in sight.

"The world is back to normal," said Sever Lundquist, the third generation of Lundquists to operate the popular Cloquet hamburger joint. The carhop was fun, he said, and they could serve a lot of food. But they missed seeing their customers, because people stayed in their cars and spoke only to staff taking their orders.

On opening day Wednesday, Sever and his dad, Dan Lundquist, were back behind the counter taking orders and talking with customers as usual.