Cloquet's Ripp rips it up at nationals 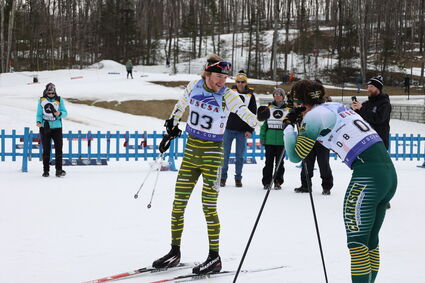 Cloquet's Aidan Ripp and his teammates from Paul Smith's College skied their way to a national championship earlier this month. It's been a good season for the Class of 2019 Cloquet High School grad, who also competed in the 2022 U.S. Olympic Trials in Nordic combined in December and a Continental Cup race in China before that.

Ripp said they weren't sure how things would go in the 2022 U.S. Collegiate Ski and Snowboard National Championships, since Covid canceled most of the big competitions the previous year.

"We knew it was in the ballpark," he said.

Over the course of the weeklong competition, Ripp took first place in two out of three Nordic ski races he competed in individually and another first in a mixed-team relay race at the USCSA national meet in Lake Placid, New York.

Ripp - who grew up skiing and ski jumping at Cloquet's Pine Valley - gives his university Nordic sports program a lot of credit for his breakout performance at nationals. "We have a good community of people here," he said, also praising the coach. "It's not easy, but it's way more fun to train and be more productive."

Paul Smith's College is located on 14,000 acres in New York's Adirondack State Park. Ripp said if he wants to go skiing, he just has to walk a quarter-mile to get his skis, then walk across the road and he's on a trail. The school is building its Nordic ski programs with great success, including Ripp's specialty - Nordic combined - and biathlon. Ripp is one of two Nordic combined athletes at the school so far.

Being there allows him to do more than train, however. He is a very good student academically, and enjoys other athletic activities in the off season. Last September, he participated in a 90-mile canoe race. "You want to keep it fresh, keep yourself enjoying it," he said. "And that built strength in a different way."

His dorm - and many of the campus buildings - sits right next to a lake. The views are spectacular, and the lake is fun.

"I just really enjoy training here. In the summer I run, roller ski, canoe, sail. I can ski on campus. I've realized a lot of training is because you enjoy it. It's so nice to be here and just get up and go train, not have to drive an hour."

Ripp started the USCSA national championship event with a commanding individual performance in the 7.5K Nordic ski race on March 8. He finished the freestyle cross country ski race in 18:26.90, almost 50 seconds ahead of the second-place finisher in a race with 52 of the top collegiate Nordic skiers.

Three of the six skiers from PSC were in the top five and Paul Smith's men's team won the 7.5K freestyle with 10 points, followed by St. Olaf with 19 and Western Colorado University in third with 33 points.

Ripp also placed first in the 15K classic race on March 11, a mass start event. Ripp finished in 43:37.40, just over 22 seconds ahead of second place, leading his team to another first-place finish in that race as well. Ripp also placed third in the classic sprint race on March 9, while the PSC team finished second.

The week concluded with the mixed team relay with three men and three women skiing laps of 1.3 kilometers in the freestyle technique. The Bobcat women started the effort in second place, opening a one-minute advantage over the next team.

The Bobcat men took over the race from there and skied away from the field, starting first with Gus Whitcomb, who established an early lead. He touched off to Logan Jensen, who kept his team at the head of the pack before turning it over to Ripp. Despite his previous successes and level of exertion, according to a PSC press release, Ripp "blew the race open on his first of three legs and continued to ski away from second-place University of Wyoming."

The performances were made more noteworthy given the radical changes in weather conditions that saw the athletes compete in rain, warm temperatures, wind and blinding snowfall. "Symbolic of the week, we literally stormed our way to our first-ever overall national championship," remarked an elated Matt Dougherty, PSC Nordic ski coach.

More than 510 competitors competed for national collegiate titles in alpine, Nordic, snowboard and freeski events at the USCSA event, including 100 Nordic athletes. 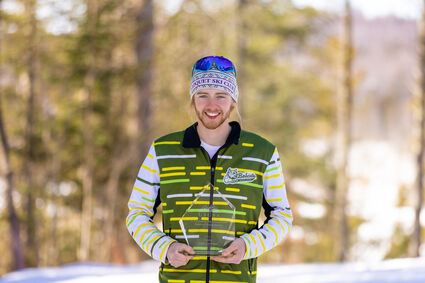 Cloquet’s Aidan Ripp will wrap up his competitive season this weekend, competing in Nordic combined at an international Continental Cup event at Lake Placid. Although the weather was “ridiculously warm” in the area last week and weekend, a cold spell meant they could make enough snow for the competition. He will jump Friday and Saturday mornings, with a 10K ski race Friday and 15K on Saturday. Online go to fis-ski.com and choose “Nordic combined” to find out more.