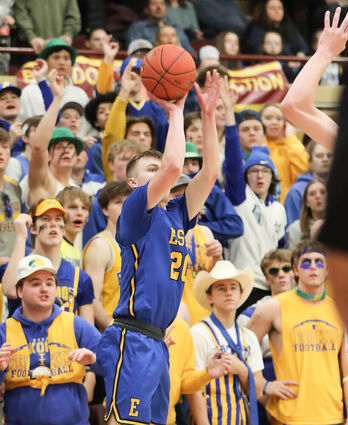 "I thought in the first half we moved the ball well, but our shots didn't fall," said Esko coach Derek Anderson. "We defended well, but we missed some layups and we just seemed passive."

The Patriots came out with a game plan of slowing down the athletic Eskomos by playing a 1-2-2 zone defense, which allowed the Patriots to dictate the pace of the game.

"At halftime we talked about coming out and being more aggressive, but that isn't how it turned out," Anderson said. "At one point we got up by nine points, but then we'd make a bad pass, or let them grab an offensive rebound and not box out on the boards."

Those offensive rebounds resulted in putback baskets and seemed to energize the Patriots, who picked up the pace as they overcame the 23-18 halftime deficit.

As with Barnum - the other Carlton County team in a section final - the day went a little sideways before the game even started. A bomb threat meant Esko students had to be evacuated for the last three hours of the school day, while bus problems delayed the Bombers' trip to play Foley the next day. 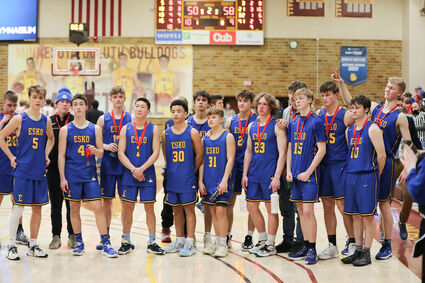 The Esko boys basketball team poses for a photo following their 58-50 Section 7AA final loss to Pequot Lakes Thursday at the University of Minnesota Duluth.

"Our goal was to get to a state tournament from the start of the season," Anderson said. "While we didn't reach our goal, which was disappointing, I have nothing but good things to say about these players and especially our seven seniors. They showed the younger kids how much work and effort is needed to get to this level, so hopefully the younger players will realize what kind of work they need to put in."

Esko, which had beaten Pequot Lakes by 13 points on Feb. 8, finished the season at 25-4 and as the Section 7AA runner-up.