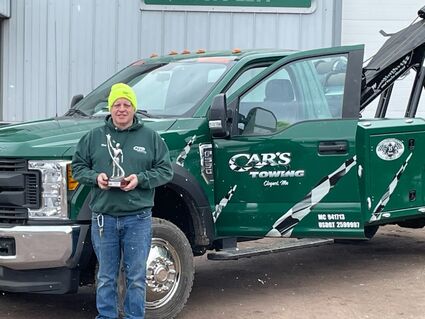 Wes Vork was recently honored in a national contest for his thoughtfulness and help on a towing call in 2020.

Cars Towing owner Wes Vork said he considers his tow truck drivers first responders, and that was never more true than a call that Vork responded to 18 months ago. Vork was honored Friday with a national award - second place in Ford's Real Heroes of the Road giveaway - for the work he did that day.

The call came the morning of Sept. 16, 2020, from a rural area outside of Tamarack. Passersby had stopped and called AAA dispatch on behalf of an elderly male driver, who said he had been with the disabled vehicle since 8 p.m. the previous night. He had no cellphone.

Vork said he noticed red flags from the moment he got the call.

Vork reached out to the Minnesota State Patrol to see if they could send an officer to do a welfare check.

Vork arrived just minutes before the officer and found the man and his vehicle. Very early on in their interaction, Vork realized the man was struggling with serious memory issues.

"My wife looks after a classmate who has early-onset Alzheimer's, and just being around, watching her and helping, has given me some real insight into Alzheimer's," Vork said of the degenerative brain disease, which is the most common form of dementia. "Without that, I probably wouldn't have recognized what was going on."

He soon found out the man was from Lakewood, Ohio, more than 800 miles away. He told Vork he was headed to a family reunion "right down the road."

Vork and the MSP officer agreed that the man needed more than a tow.

"While the state patrol tried to contact relatives through the Ohio police, I contacted AAA dispatch for additional contact information. None of these efforts were successful in reaching his loved ones," Vork shared. He also contacted the passersby who helped the man call AAA in the first place, and said they hadn't realized there were any issues and felt terrible. "I told them they got the ball rolling," Vork said. "It's not always easy to tell what's going on."

The state patrol called the local first responders and the McGregor ambulance service to assist the man. They took him to the hospital in Aitken, and Vork towed his vehicle to a service center nearby. Eventually someone reached his family and the man returned to Ohio safely.

It was just another day on the job for Vork.

"Everyday is unique for us," Vork said. "A lot of it isn't very positive, picking up vehicles from police calls, but we've certainly been part of other medical issues," he said, adding that people can get very cold waiting for a tow truck.

Vork said he sent in this particular story for the Heroes of the Road award for a couple of reasons. One, he wanted to make people more aware of Alzheimer's disease and the devastation it can cause; and two, he wanted to share his award with the McGregor ambulance service. If it had been the first-place $30,000 toward a new truck, he wanted it to go to the rural ambulance service. 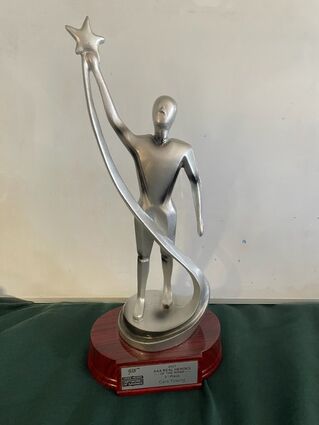 "These folks did as much or more than I did in helping this 48-year AAA member. Rural emergency providers also face a lot of real challenges," Vork wrote in his application. "Not the least of which is budgeting for new equipment over a very large sparsely populated tax base."

The Cars Towing second-place award of $3,000 toward towing equipment will help pay for outfitting a nearly completed truck, Vork said, so he decided to send $1,000 of his savings to McGregor Ambulance and $1,000 to the Alzheimer's Association.

The best reward may have been the phone call from the AAA member. Vork said the Ohio man called him after he got back home, and thanked him for "providing outstanding service and providing valuable assistance to bring the entire ordeal to a close."

He told Vork, "It's nice to be back home where there isn't near as much excitement."