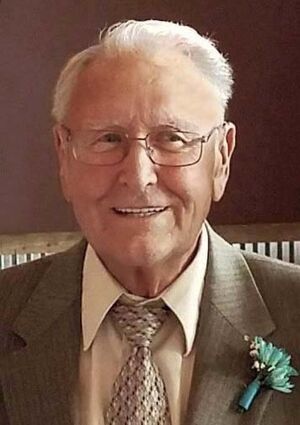 James Edmund Flynn, 89, longtime resident of Esko, passed away peacefully surrounded by his family on March 23, a week shy of his 90th birthday. He was born March 31, 1932, to Thomas Herbert Flynn and Margaret Etienne. He was united in marriage to Verna M. Pantsar on May 31, 1952, under an apple tree on the Pantsar homestead. Jim was preceded in

While in school, Jim excelled in basketball with honors, and was the “spark plug” of the team; he was also a football and track standout. Jim was known for his work ethic. He worked for DM & IR Railway in Proctor, Chun King and Rudy’s Gas Station, and was also a bouncer and bartender. He had a 38-year career as a foreman and pipefitter at Northwest Paper/Potlatch, retiring in 1994. While at the mill, Jim was an active local union member and supporter of the AFL–CIO.

He enjoyed his work and travels for the union. Travel was a big part of his life! Jim and Verna traveled the world from Alaska to Mexico, to Canada to Hawaii and every state in between. They traveled abroad to Germany, Switzerland, Austria and the Canadian provinces — and not to forget, to Finland and Ireland, as they were very passionate about their heritage. Jim

loved to dance with his life partner, Verna. They enjoyed the polka, waltz and schottische, as well as square dancing. Jim had a love for all music. Family was very important to Jim. His love for his children and grandchildren was apparent. They took many family trips throughout the years, and enjoyed camping and snowmobiling. He took pride in supporting his grandchildren. He never missed a sporting event. Jim was known as one of Esko’s biggest fans. He also loved watching the Vikings and the Twins. In his “spare time,” Jim built three homes, after purchasing and developing 40 acres known as the “Flynn Addition.” He was an active man. He spent many mornings at the Esko Fitness Center, enjoyed golfing with his buddies, and loved to ride his Gold Wing motorcycle. He also found time to spend 14 years as a snowbird in Arizona and developed cherished friendships.

Visitation: 10 a.m. until the 11 a.m. Celebration of Life Thursday, March 31 at St. Francis Church in Carlton, with a luncheon to follow in the church fellowship hall. See the online guestbook at http://www.nelsonfuneralcare.net.

The family thanks all of the special people at Inter-Faith Care Center, Suncrest, and St. Croix Hospice for their tender love and care.