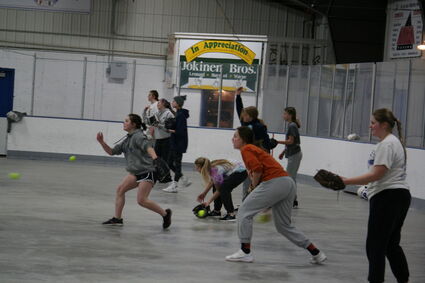 Raptors softball players take in some fielding drills Tuesday at the Four Seasons arena in Carlton. The melding of Carlton and Wrenshall teams has taken some getting used to, but the players report things are going well.

For Carley Lawry, one draw for the new pairing of Carlton and Wrenshall athletes in softball are the Raptors uniforms. "The jersey colors are snazzy," the eighth-grader said Tuesday at practice in a chilly Four Seasons arena in Carlton.

But forgive the teams if they aren't exactly decked out in cool new uniforms to start a season that was expected to kick off today with games at Mountain Iron-Buhl. The school districts applied for the cooperative program at the 11th hour last month when participation numbers showed both teams could be short of a safe number of players. The uniform order, like most things these days, will likely not come in on time.

"This is it," coach Brent Pokornowski said Tuesday, pointing to his Raptors T-shirt. That will be the unifying dress for now for a bunch of girls who are just three weeks into an enterprise that has them finding new friends and a new spirit. For the first time in years, players will enjoy a varsity, junior varsity and junior high slate of games. There are 32 players from grades 7-12.

MaeLyn Pokornowski, daughter of the coach and a senior at Carlton, said, like many of those at practice, that she was skeptical of the pairing at first. The schools remain neighboring rivals. Despite Raptors pairings in football, cross country and track, the softball players have history as Bulldogs and Wrens in softball, volleyball and basketball. "How are we all going to get along," Pokornowski recalls wondering when the cooperative was first introduced. "I just decided that having a big team is better."

"Both teams came in to win," she said.

Brent Pokornowski is coaching the team with Wrenshall's Anna George. He said he's excited to work with her, having admired the way she'd built up a Wrenshall program that had been foundering in the mid-2010s.

"They wouldn't have had a team without someone like her, and that's the kind of person you want to coach with," he said.

The two coaches had a sit-down when the Minnesota State High School League approved the pairing. "I knew immediately it would go well," George said. "We work as a team. We have the same vision of what we want practice to look like and both have similar expectations from the girls."

The numbers game caught up with the Wrens, and rather than having young players move up into varsity, the idea was hatched to pair up the programs. Carlton has also had to utilize young players. Lawry, as a seventh-grader, played on the varsity last year.

"It is a lot of fun having so many players to fight for positions," Pokornowski said. "There is a high level of competitiveness at every position."

The first order of business was creating a comfort level among the players. "The kids were a little nervous about the co-op being accepted," George said. "I did my best to assure them it was the best move for them and for the longevity of the program."

Wrenshall senior Lacy Lekander said former opposing players reached out to each other to put things in perspective, knowing there were likely some rivalry "beefs" that still existed. "We just said everything outside of softball stays outside of softball."

For Lekander, the pressure of Wrenshall going alone and wondering if one injury or illness could scuttle a season is distracting. "Last year was rough," she said.

MaeLyn Pokornowski also said the Bulldogs season was "jacked" last year. She said the low numbers of participants often meant that the focus was on the older athletes and younger players got left behind in being taught the basics as they were thrown into the pressure of varsity play. "We are making sure they are learning," she said.

"The girls have been really accepting of each other so far," coach Pokornowski said. "They are blending together and everyone is on board with trying to build this into something special."

You get that vibe with a short visit to a practice. The players encouraged each other and, when asked, said they've made surprising friendships with girls from the other school.

"It's fun," Lowry said, taking a break from a fielding drill. "This worked out for the better."

Carlton senior Haley Ableiter said it was a strange winter, given that the high school was threatened to be shut down in an agreement with Cloquet to take its older students. The school board dropped the idea when a community outcry arose.

"This is an awesome opportunity and something we want to help build. Even when we're gone, we want to support the program," Ableiter said. "We didn't know if we'd have a school let alone a softball team." 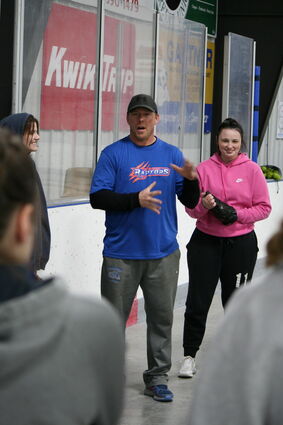 Raptors coach Brent Pokornowski opens practice Tuesday with some information on the week ahead and some light moments figuring out a team cheer. He was flanked by Carlton seniors MaeLyn Pokornowski, left, and Haley Ableiter.

What can you expect from the Raptors softball team this year?

"We have some young skill on this team and many utility players we can play anywhere," coach Anna George said. "Many positions are open and it may take a couple of games to figure out who flourishes in what position. It will make for a fun and competitive season."

"We expect to be fundamentally sound with good pitching, good contact hitters, and some speed with the ability to take advantage of bunting and base running," coach Pokornowski said. "It's early, but we have a couple of surprise power hitters starting to emerge, and that is exciting."

Pokornowski has a mantra for the Raptors: "Prepare for success, win small battles, take opportunities they give us, make the right play and get a big Raptor hit every now and again."