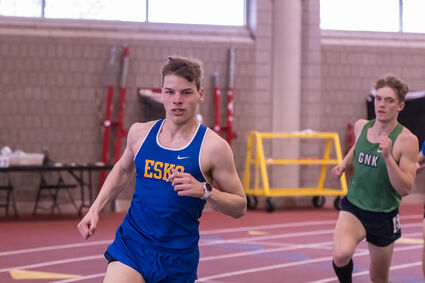 Nate Rengo, an experienced distance runner for Esko, competed at the indoor meet last Saturday at the University of Wisconsin-Superior.

The warm weather of spring and the melting snow has local track teams getting ready for another exciting season. Take a look at some of these athletes in this preview of the 2022 track and field season.

Longtime Cromwell boys and girls track coach Dave Foster welcomed 35 athletes just a couple of weeks ago. Some of the very best runners in the area sport the Cardinals logo.

"On the girls side we will be very young, with no senior or junior girls this year," said Foster. "The boys team will be about half upperclassmen."

Foster will most likely be the area's top runner at 3200 meters, after finishing eighth at the state Class A meet last season as a sophomore. The junior is also a force at 1600 meters.

Look for the Cardinals boys team to get valuable points from 400-meter runner and jumper Dylan Nyberg, as well as Tanner Collman in the hurdles and jumps. Nyberg is just a freshman and Collman is a sophomore, and they both qualified for sectionals last season.

Freshman Siiena Anderson should give the Cardinals girls a good shot in the arm in the 400-meter run, after making sectionals as an eighth-grader last season.

The Barnum Bombers may hail from a small school but their track teams are thriving, as their coaches welcomed their charges to practice last week.

"For a school our size, we are happy with our numbers," said Rich Newman. "We have around 45 to 50 athletes in grades seven through 12 this year."

Despite big numbers, the Bombers will still need to rely on underclassmen to score points for them this season.

"We will be young this year, with only a few athletes returning who made it to sections last year," Newman said.

Some of the athletes looked upon to score points for the boys team include Hayden Charboneau in the hurdles, Carlos Beckstrand and Caden Sheff in the sprints, Shawn Bailey and Gavin Thiry in distance events, and Mark Hall in the shot and discus.

Look for Aili Lund to score points in the hurdles for the girls team.

"We want to work every day and try to get better and more competitive every meet," Newman said. "We have a great group of athletes who get along and enjoy each other. Also they are very supportive of each other and push each other to get better."

"We expect to be pretty competitive in all events this season," said Kevin Olesen, one of a number of coaches for the Raptors. "With our added numbers some kids are forced to try new things they haven't before, and they are finding out they are pretty good at them."

With 29 girls and 19 boys, the Raptors will have a chance to score points in most every event this season. On the girls side, the team features a good mix of sprinters and distance runners who have experience at the varsity level. Look for Abbie Resberg to have a very good season in the throws for the Raptors.

"We didn't send anybody to state on the girls side last year, but we have almost the entire girls Section 7A champion cross country team on our roster, so hopefully their success on the golf course last fall will translate to the oval," Olesen said.

The boys have a good group of returners along with a number of first-time athletes.

"We should score quite a few points in the jumping events, and we'll put together some decent relays. We also have some strength in our distance runners."

Returning top runners include Dante Thompson, who was third in last year's section triple jump; he will also be a force in the long jump and 110 hurdles. Look for Jack Riley to be good in the distance events; he ran in the state cross country meet last fall.

"It's been exciting, and at times stressful figuring out the logistics of a new co-op team," Olesen said. "This co-op has been a long time coming and has taken a lot of work and vision to make it happen."

As usual, the Eskomos will be a force to be reckoned with on the track this spring, with five state qualifiers from last season returning.

Emily Rengo returns as the defending Section 7A champion in the 100-meter dash, Kaitlyn McConnell was a state meet qualifier in the 200, Gwendolyn Lilly qualified for state last year in the 100-meter hurdles and Ingrid Hexum qualified for state in the 800-meter run. Rengo, McConnell and Lilly were also part of the 4x100 meter relay team that finished fifth in the state last season.

Seniors Grace Shingledecker and Grace Hrabik look to score points for the defending Section 7A champions in the distance events.

"Last year we were blessed with success winning the Polar League championship, South Subsection 7A championship and a Section 7A championship," said girls coach Matt Peterson. "With the returning talent we have on the roster and with the incoming athletes, we hope to be in a similar situation this season if everything comes together."

Carter Zezulka is the lone returning Esko boys state entrant, but don't feel sorry for the boys team. They're loaded with returning talent and depth.

"We will have a great distance crew," said boys coach Gary Beaudot. "We have state team qualifiers in cross country and we are very experienced in the throws, jumps and sprints. With the numbers we have, we are hoping for nice depth in most events."

"We are hoping all four relays are strong and have a good chance," said Beaudot. "Individually, Chad Hart and Carter Zezulka probably have the best chance. We also have some exciting new athletes who may surprise us."

While the Panthers will be young this season, they may just feature one of the most dynamic athletes in the area this spring in hurdler Tony Cummins. Cummins was a force last year in the 300-meter hurdles and he figures to be even better this year.

The Panthers have a plethora of state qualifiers returning.

"We return seven athletes that were part of our state team last year," said longtime South Ridge coach Jeremy Polson. "Our 4x400 relay team of Jillian Sajdak, Kenna Ridge, Ana Ridge, Madison Ellefson and Paris FierkLepp are all back, as is Tony in the hurdles for the boys."

Another key returning athlete for the girls will be Kaitaia Klementsen, who returns in the high jump for the Panthers.

"She has placed first and second in the high jump at the two meets at the University of Minnesota we've been to already this spring," said Polson. "She has already high jumped a personal best of 5 feet this season. Overall we have a young team, but we have experience in a few key areas."

The Moose Lake/Willow River Rebels had a good-size group of athletes stepping on the track this spring and the boys program is hoping to build off last season's success.

"The boys team had one of the most successful seasons in school history last year," said head coach Noah Jurek. "We sent many runners to the state meet and also were the runners-up in the True Team section meet and Polar League Conference."

While the girls team didn't have quite the same success last season, Jurek is optimistic.

"I feel like the girls team is on the fringe of having some great performances this season," he said.

The boys 4x800 relay team, which went to state last year, returns all four runners in Zach Youngs, Joseph Mikrot, Kaden Robbins and Daniel Mikrot. Jaxsyn Schmidt ran in the 4x100 and 4x200 relays with Jackson Thompson, who also had a stellar season in the pole vault. Robbins also ran in the 100- and the 200-meter dashes.

"Our girls team is made up of a large group of 10th-graders that have all been out since seventh grade," said Jurek. "The team will be looking to them to lead this year."

As far as expectations for the Rebels, Jurek is excited about the possibilities.

"I like our chances for all of our returning state competitors, and I guess people will have to come out and see what other surprises the Rebels Track and Field team has to offer this season," said Jurek.

With well over 100 athletes out for track in Cloquet, the Lumberjacks sport one of the largest teams north of the Twin Cities. Head coach Tim Prosen is excited about the season and feels the depth of the team will be strong.

"We should be pretty solid in every event," Prosen said. "Our coaches have worked really hard building our field events so we should be quite strong there, hopefully, as our team comes together. We have a few holes to fill from graduation last year but I feel we will continue to fill those spots and put a nice team together."

A year ago the Lumberjacks boys team came within a whisker of winning the True Team state meet and the girls also finished high at that meet.

"It is ironic that we sent one individual athlete to state last year, Paddy Genereau, who took fifth in the 300 hurdles, but we were among the best when it came to the True Team state meet," Prosen said.

A big factor in the success of the girls team will be the return of Olivia Jameson, who qualified for state in the 100 hurdles, the triple jump, and high jump. 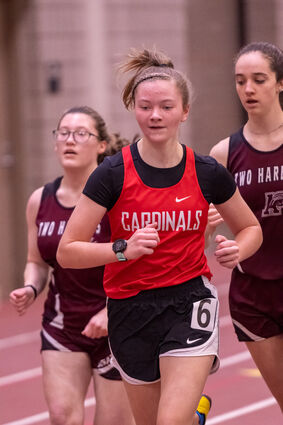 Emaleigh Olesiak of Cromwell moved to the front in the girls 1,600 meters with a few laps to go but had to settle for third as she was passed by Two Harbors runners Autumn Smith and Lamar Gordon in the last 100 meters.

"She placed third with a sprained ankle in the high jump, but did not compete in her other events because of that ankle injury," said Prosen.

The addition of a third class in track should benefit Cloquet.

"We have always been in the largest-school class essentially as one of the smallest schools," said Prosen. "Schools like Elk River, Andover, Forest Lake, Cambridge-Isanti and others move to the larger class. Now we will be somewhat in the middle of the AA class. The new section will create more equality and parity."

On a side note this season, Prosen will get the opportunity to coach three sons this season, a rarity for a high school coach. Cale is a senior, Emmet is a sophomore and Blake is a seventh-grader. "Cale has been running around practice since he was a year old, all of our boys have grown up as part of our program, the student-athletes have helped raise my kids," said Prosen. "It is my last year to enjoy our boys together competing for the Lumberjacks."