Our View: Move over, slow down 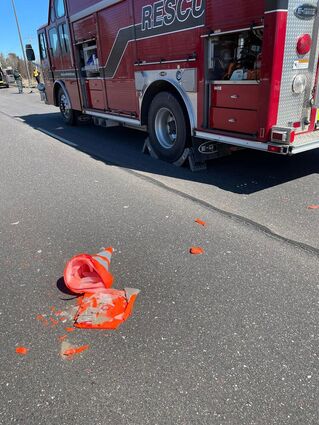 Last Friday, a local firefighter could have been hit by a passing driver. Fortunately, he had retrieved the equipment he was taking from the rescue truck before the driver demolished the traffic cone near the truck, without even slowing down.

When you see emergency responders — police, firefighters, ambulance, tow truck drivers — responding to roadway incidents, move over and slow down.

Minnesota’s Ted Foss Move Over Law, named in honor of the State Patrol trooper who was killed while on the shoulder of I-90 in Winona in 2000, states:

• When traveling on a road with two or more lanes, drivers must keep over one full lane away from stopped emergency vehicles with flashing lights activated.

• If you are unable to safely move over, slow down.

• Failing to take these actions endangers personnel who provide critical and lifesaving services, and drivers can be fined.

Not following the law could result in injury or the death of a person who is out there trying to help.

In this case, it was a crash with injuries on Highway 33 just north of the Family Tradition restaurant. The fire truck was in the right lane, with traffic being detoured to the left lane of the highway. From photos posted on the Cloquet Area Fire District Facebook page, it looked like the driver must have avoided the first two cones directing them into the left lane, then crunched the cone nearest the truck. CAFD battalion chief Chad Vermeersch said they didn’t get a look at the driver, so they don’t know if the person was distracted by their phone or what caused the momentary lapse.

“We just heard the crunching [of the cone],” Vermeersch told the Pine Knot. “We hurried up to make sure everyone was OK, because someone had just been there. They were.”

So far this year, 16 emergency responders have been struck by vehicles and killed across the U.S. Thank goodness, we didn’t add No. 17.

Drive safely, don’t get distracted and do the right thing when you are passing police, firefighters, tow truck drivers and other emergency responders or even just people on the side of the road. Move over if you can, and slow down, always.

It may save a life.