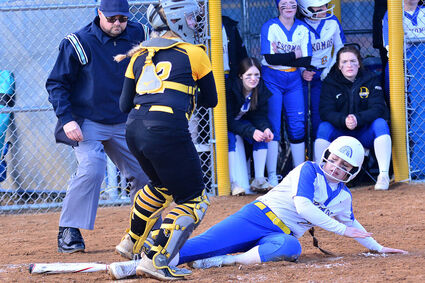 Esko's Kaitlyn Adkins slides into home plate, but is called out as the Eskomos fall to the Eveleth-Gilbert Golden Bears Monday afternoon in Esko.

Opening the high school softball season against one of the top teams in the area is never easy, but to open on the road when your team has not had a chance to practice outside is even tougher. That was the case for the Cloquet girls softball team Monday when they opened at Superior in a 16-1 loss to the Spartans.

"It was tough on the girls because we haven't taken any grounders off dirt and only about a half hour of fly balls outside, so the adjustment was tough," said Cloquet head coach Tyler Korby. "Superior is an awfully good team and their pitcher is really good and one of the best in the area, so we saw one of the best right away to start the season."

The Spartans are led by their battery of catcher Emma Raye and pitcher Haley Zembo. Zembo and Raye - who is headed to play for the Wisconsin Badgers at the Division I level - both did their part in the victory. Raye hit a home run and Zembo fanned 10 Lumberjacks in the win.

Superior held Cloquet scoreless to start and then came out and exploded for 10 runs in the bottom of the first inning to take a 10-0 lead.

"That was a tough first inning, but I like how the team kept fighting and came back and outscored them in the next inning," said Korby.

Senior third baseman Justice Paro scored the lone goal of the game for Cloquet in the second inning as the 'Jacks trailed 10-1 after two complete innings of play. Unfortunately for Cloquet, the Spartans added a run in the bottom of the third and five more in the bottom of the fourth to go ahead 16-1. The game ended in the fifth when the Lumberjacks were unable to cut into the lead as the 10-run mercy rule went into effect. 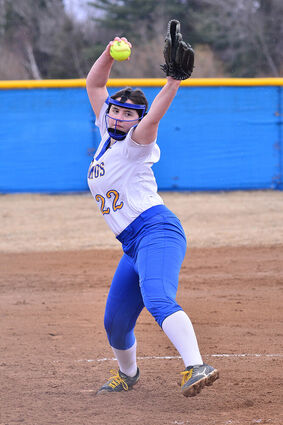 Esko's Mikayli Marciulionis winds up for a pitch Monday afternoon against the Eveleth-Gilbert Golden Bears. Marciulionis led the Eskomos in a rally, but it wasn't to last.

On the mound for Cloquet was freshman pitcher Allie Jones, Dana's younger sister. Jones finished the day with four strikeouts and she gave up 10 hits.

"I thought Allie did fine for her first game this season and only her second start ever," Korby said. "I liked our resiliency and how we kept fighting."

Cloquet was scheduled to play at Duluth East on Tuesday, but that game was canceled due to inclement weather.

"We just couldn't be more grateful to play and be out on the field," Korby said. "The kids were just thrilled to be outside. We will learn from this game and get better as the season goes on."