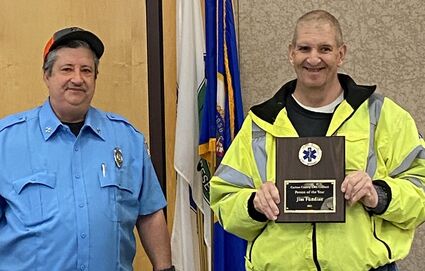 Volunteers from the Mahtowa Fire Department and the dispatch supervisor at the Carlton County Sheriff's Office were recognized at this year's Carlton County EMS Council awards.

EMS Council chairman Steve Trenhaile of the Moose Lake fire district handed out plaques for Jon Fundine for a Lifetime Achievement Award, his brother Jim Fundine for an EMS Person of the Year, and Dylan Bridges as a Carlton County Friend of EMS at the county board meeting on April 12.

"The knowledge he gained, he shared with us (of the fire department) and making us better EMRs," Lambert wrote.

More recently, Jon has become ill and has curtailed his work and is missed by those volunteers in Mahtowa. 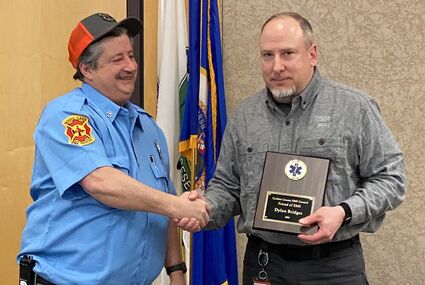 His brother, Jim Fundine, has been a Mahtowa Fire Department volunteer for 32 years. He said he hopes to serve a number of years more and maybe beat the all-time record for service in the local department. Jim, it is noted, responds to almost every emergency call and is known to be very adaptable in any situation. He accepted his EMS Person of the Year award and the EMS Lifetime Achievement Award for Jon.

Carlton County 911 dispatch supervisor Dylan Bridges accepted the Friend of EMS award. Trenhaile said Bridges was instrumental in training local emergency medical responders in the constantly changing technology to make sure they have communication that is effective and operates smoothly.

Bridges trained first responders to implement the new IamResponding emergency notification and response system which enables their cellphones to be used as pagers for emergency calls. Trenhaile said Bridges and his staff of dispatchers have made their emergency work much easier.