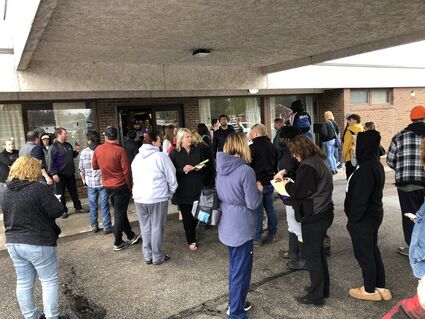 Parents line up outside St. Paul's Lutheran Church to check out their children after they were evacuated from the high school because of a bomb threat Wednesday. The call was identical to the Esko bomb threat on March 17, Cloquet police said. The Esko call came from overseas, according to the FBI.

Just over a month after Esko schools had to evacuate due to a bomb threat, the same thing happened in Cloquet on Wednesday, April 20.

Cloquet police chief Derek Randall told the Pine Knot that the Cloquet High School call was "exactly the same script" as the Esko call on March 17, including allegations of a backpack with wires being left in a particular classroom.

The FBI confirmed afterward that the call to Esko - and numerous other schools in Wisconsin, Louisiana and California on March 17 - came from overseas. Carlton County Sheriff's Office Lt. Dan Danielson said the FBI determined the call appeared to originate from Africa, but didn't specify which country within Africa.

It's unknown whether the Cloquet call came from the same place, but a press release from the CPD said other schools in the state received similar threats Wednesday. 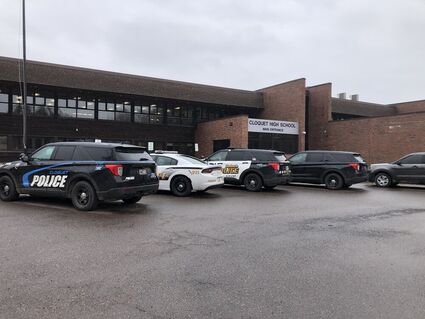 Cloquet schools superintendent Michael Cary said after receiving the call, they chose to evacuate both the high school and the middle school "out of an abundance of caution" and allowed parents to pick up their children from the evacuation sites at two nearby churches. At St. Paul's, high school staff members were standing outside as a line of parents waited in a cold drizzle to check out their kids. A steady stream of cars headed in and out of the church parking lot, while 18th Street - which runs between the high school and the church - was blocked off by police cars. Middle school kids evacuated to Journey Church.

Public safety, with the assistance of a bomb-sniffing dog from the Duluth Police Department, searched both buildings. Nothing was located and both buildings were given the all-clear just before 2 p.m. All after-school activities at both schools were canceled.

"It's too bad this happened," said one mother, who was picking up her son from St. Paul's. "These kids need to be in school."

Anyone with information regarding the threat is asked to contact the Cloquet Police Department at 218-879-1247. One can also send tips via text/SMS by texting the words TIP CLOQUETPD followed by a message to 888777. Tipsters can remain anonymous.