War in Ukraine: From Cloquet to Poland 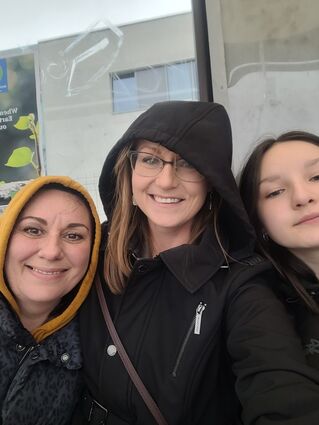 Cloquet's Carmen Purcell, center, poses for a photo in Poland with Vittoria, left, and Sonia, dear friends from Ukraine that she would like to bring to Carlton County until things are safe again in Ukraine. For now, they remain safe in Poland and Purcell is back in Minnesota.

For those wondering how Carmen Purcell has fared in her mission to aid or rescue a Ukrainian teenager she considers a member of the family, things are moving in the right direction.

When the Pine Knot News last wrote about Carmen and Craig Purcell and their fears for Sonia, a 14-year-old they hosted here in Minnesota when she was 9, Sonia and her parents were living in a town occupied by Russians, but not under direct attack. That was March 4, eight days after the war began. (See "Family has deep ties to Ukraine," at http://www.pineknotnews.com.)

Fortunately, with some financial assistance from the Purcells and a neighbor driving, Sonia and her mother made it safely from their home northeast of Kyiv to Poland, initially staying with Sonia's brother and girlfriend in a small apartment there. Her father and the family dog remain at home.

Carmen traveled to Poland March 23, staying there for 12 days and bringing donations from Minnesota for the war effort and Sonia's family. After arriving, she helped the mother and daughter find a hostel with more space and privacy.

The Polish people have welcomed them, Carmen said, opening up churches and community centers so people have a place to sleep. "They're doing their best to offer food, clothing, hygiene items, plus there's a lot of people from other countries there helping too," she said, adding that she met a man who was cooking 1,500 meals a day to give out to refugees at the border.

"There's a lot of that going on: people trying to help any way they can," she said. "I think the people were more helpful than the government ... I realized you have to talk to everyone around you and we did."

Carmen said the trip was an eye-opening experience for her as an American, who is used to being able to travel freely.

"I thought I would get there, say we will sponsor them, and get a visa - why would they say no?" she said. "It was not like that. I was so surprised."

Then there's the issue of the family Sonia already has. Sonia's mother, Vittoria, is undecided about traveling to the U.S., as she doesn't want to be far away from her husband and elderly mother in Ukraine and son in Poland.

Initial efforts to update Sonia's expired passport or get them a visa to come to the United States were unsuccessful, but Purcell had cause for hope this week: she heard Monday that there was finally some kind of process for Ukrainians to apply for visas to the U.S. from Poland. Before that she thought Sonia, her mom and maybe her aunt and cousin might have to fly to Mexico and apply for asylum at the U.S. border.

Carmen also said her viewpoints on immigration have changed. "It's different when it's personal," she said.