Barney is a total gym rat 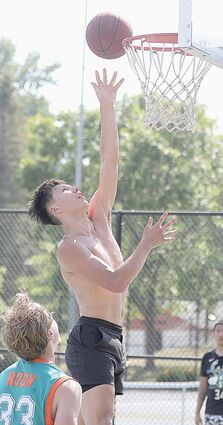 Nobody in the last three years has shot more hoops in the Cloquet and Fond du Lac area than Cloquet senior Conner Barney.

Barney's high school career ended with Cloquet losing to Hibbing in the sectional tournament in March, but his mark on the region could be felt for many years to come. He wants to improve himself but also share his love of basketball and positive actions with youth and others.

His basketball legacy is as follows: two years at Fond du Lac Ojibwe High School with 1200 points scored, and two years at Cloquet (his junior and senior seasons) with 988 total points for a grand total of 2,188 high school points.

Barney grew up in the Leech Lake area and moved his freshman year to live with his brother on the Fond du lac Reservation. He attended Fond du Lac Ojibwe High School and banged his way in the paint to score a majority of his points. Practicing and playing with his two older brothers, he was used to physical play - where typically, no fouls were called.

Class A ball is quite physical, too, he says. Basketball coaches and experts were impressed by his self-taught footwork that freed him of would-be defenders under the basket. His spin move was poetry in motion, and his brothers helped him perfect it.

The onset of Covid-19 and the pandemic saw the Fond du Lac school make the difficult decision of suspending its basketball season his junior year. But Conner wanted to play basketball. He checked his options in the region and then talked to Lumberjacks coach Steve Battaglia. He decided to stay home and play at Cloquet.

When asked about acceptance by his new teammates he said "they were curious to see what it would be like to play with a guy who had averaged nearly 30 points a game at Fond du Lac. I think they found out they liked it."

He fit in well and made Cloquet a better team.

Barney's drive for continual basketball skill improvement is inspiring. He wants to be multi-dimensional, which makes the opposing team's challenge of guarding him more difficult. He worked constantly year round on his pull up jump shot - his goal to become a three-point shooting threat as well as still having his inside game.

Barney can often be seen playing pickup basketball games - when the snow clears and in the summer months - at the Pinehurst Park courts in Cloquet, taking on would-be challengers along with his brothers. While at Cloquet, he liked being able to help bring the ball up the court against opposing team presses and he often played point guard to help distribute the ball to open teammates.

Barney is now close to 6'3" and about 200 pounds. He works out at Anytime Fitness and is continuously calling around Carlton County to find some open gym time. He wants to get "10 times better each season."

He'll play hard and will be interested in what opportunities will be present after junior college. He is on an AAU All Star team that plays all over Minnesota and he has played in several Native tournaments including one in North Dakota and also Denver. He is definitely a basketball globetrotter.

Barney loves being a role model and leader for the community youth. He encourages kids to come and play and workout with him. He tells them about alternative "routes". Conner hopes to bring gym possibilities to kids that are free of charge and held in a safe environment. His goal would be that kids would call him with questions or even to ask for workout choices. His ambitions are very noteworthy.