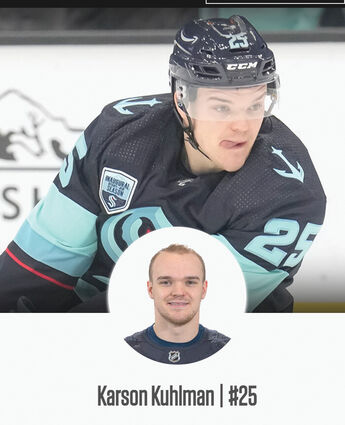 Karson Kuhlman, as seen on the Seattle roster page on the Kraken website.

Former Cloquet-Esko-Carlton hockey player Karson Kuhlman picked up his first goal for his new team, the Seattle Kraken of the National Hockey League, on April 9.

Kuhlman was picked up in January, after being put on waivers by the Boston Bruins, and almost immediately injured. But he's healthy now. The situation in Seattle for Kuhlman is a better one for him since he will now have an opportunity to be in the lineup on an everyday basis, compared to his time with the Bruins.

On April 9, Kuhlman notched his first goal wearing the Kraken jersey when he blasted a one-timer from his knees past Calgary netminder Jacob Markstrom. Since joining the Kraken, Kuhlman has scored two goals and had three assists.