Wilderness win and are in 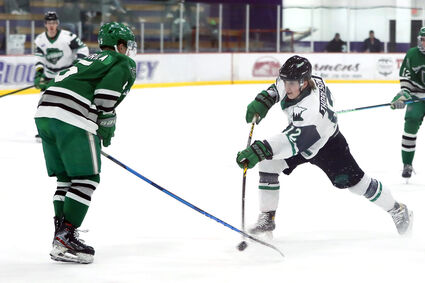 It took the 60th and final game of the season at home for the Minnesota Wilderness to clinch a playoff berth in the North American Hockey League playoffs Saturday.

After dropping a 7-2 decision on the road to the Chippewa Steel on Friday night, the Wilderness were in a must-win situation on Saturday at home. The Wilderness needed overtime, but eventually found a way to win 2-1 and finish as the fourth and final playoff team in the Midwest Division.

"Going into the weekend, if we had won both and everything fell right we could have finished as the No. 1 seed, but on the other end a couple of losses and other teams winning would have completely eliminated us from one of the top four spots," said coach Dave Boitz. "After getting beat on Friday on the road the guys responded with a great performance on Saturday."

After a rough patch of games in the first half of the season, the Wilderness went on a 22-6-1 run over the final 29 games and stormed to a playoff berth with the best record of any team in the NAHL over the second half of the season. Despite the great second half, it took a Herculean effort on Saturday to snare a win and gain the final playoff spot.

"Friday night we just got behind early and couldn't get anything going," Boitz said. "Saturday morning we had a meeting and I told the guys if we don't win there is a good chance we are done. We played way too hard over the second half of the season, and worked too hard, to not get a playoff shot."

Standing between the Wilderness and their shot was goaltender Croix Kochendorfer. "That kid is incredible," Boitz said. The Wilderness peppered him, getting 44 shots on goal. "There were NHL scouts there looking at him, not college scouts, but as good as he is we have a pretty darn good goalie ourselves."

Boitz was talking about Matt Smith, who has come in since just before Christmas and run off an incredible series of wins and stabilized the goalie situation. On Saturday Smith got the overtime, stopping 18 of 19 Steel shots.

The game was scoreless through the first two periods, but the Wilderness held the upper hand in territorial play by outshooting the Steel 28-13 through that stretch.

The Steel notched the first goal 6:40 into the final period when Roux Bazin slipped a rebound shot.

"Despite them getting the goal, I wasn't worried because we were playing so well," Boitz said. "Our guys stayed super positive and were relentless in their pressure. They scored the goal after we had to kill three power plays in a row so we just had to weather the storm. There was no panic and we had to regain our composure and just keep fighting."

After fighting through the man-short situations, less than two minutes later it was the Wilderness' Cole Gordon deflecting a shot by Bobby Metz that got by Kochendorfer and sent the crowd of more than 1,500 into a frenzy.

Following the Gordon goal the Wilderness put on a massive flurry on the Steel net, but Kochendorfer was able to hold them off and send the game to overtime.

"We had many chances to win after we tied it, but we just couldn't get anything past the goalie," Boitz said.

That changed when the Wilderness finally ended the game on a goal from first-year player Jared Mangan, who rifled a shot on Kochendorfer, who made the initial save, but the rebound came back to Mangan and he tucked it under the crossbar on a backhanded shot 4:14 into overtime.

"I told the guys after the game I never doubted them for a minute," Boitz said with a laugh. "Both goalies were terrific and it was a heck of a game and the guys were really excited after the win. Our bench exploded."

The victory secured the last seed in the Midwest Division, which means the Wilderness will head to Fairbanks on Friday to play the top-seeded Ice Dogs in a best-of-five series.

The first two games will be Friday and Saturday nights in Fairbanks. With Fairbanks having home ice advantage, there are two scenarios which will lead to a third game being played in their home arena on Sunday: if the series is tied at 1-1, or if the Wilderness win the first two games, the two teams will play on Sunday in Fairbanks. 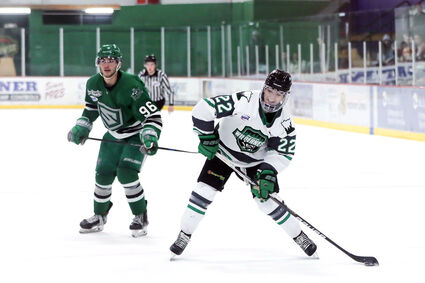 Minnesota Wilderness's Jaren Mangan looks for his shot in front of Chippewa Steel's Ryan Remick during Saturday night's NAHL hockey game. Mangan would score on his own rebound to win the game, 2-1 for the Wilderness.

If Minnesota is victorious in all three matchups, the series will be over, and the Wilderness will get to host at least one game in the second round of the playoffs. If the series is at two games to one, with either team owning the lead, the remaining contests will be held at Northwoods Credit Union Arena in Cloquet beginning April 29.

The only way a third game, scheduled for Sunday, will not be held in Fairbanks is if the Ice Dogs win the first two games. In that case, the third game will be in Cloquet on April 29. Games 4 and 5 would also be played in Cloquet.

The Ice Dogs won the division with 77 points and the Wilderness finished fourth with 72 points, which shows how close the division played out over the course of 60 games.

"We lost the first three of the season against Fairbanks, but we won the last two," Boitz said. "We think we are pretty even with them and we know we can compete with them. I expect it to be a heck of a series."