For Carlton, the show goes on 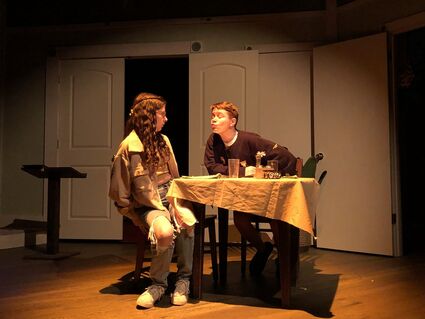 Jasper Crane, as Ken, leans in for a smooch minutes into a first date as Girl 2, played by Kayla Radtke, decides maybe she should just get the check and depart. Carlton High School is presenting "Check Please" at 2 p.m. and 6 p.m. Saturday at the Encore Performing Arts Center in Cloquet.

When Carlton school board members decided in January to cut funding for a spring play director, Amanda Radtke decided she would volunteer to direct, even though she had no experience and "very little theater" in her background. But, as the academic, social and emotional learning advisor in the district, she knows her students.

"The play is something the kids look forward to every year," she said this week.

And so it is that high school students will present "Check Please," a humorous and very cute one-act play about a series of first dates that go wrong, Saturday with two shows (2 p.m. and 6 p.m.) at the Encore Performing Arts Center in Cloquet.

The choice of a one-act, with minimal technical needs, was intentional, given Radtke's inexperience and demanding schedules of the students.

"We chose this play, in part, because I wanted something that would be achievable for a first- time director," Radtke said. "Another factor was that our cast is made up of students who are involved in athletics, other extracurricular activities, and who have jobs."

"Check Please" relies on the actors to set the scenes as "Guy" and "Girl" sit several tables away from each other, meeting one bad match after another until finally bumping into each other.

"It is just a funny play and will be enjoyable for an audience," Radtke said. "The kids have had fun with it."

The play was delayed for a week after a round of Covid-19 cases struck the County Seat Theater cast, which is also in the midst of another production at the busy arts center.

Radtke hasn't been alone in her venture into directing.

"I reached out to another Carlton staff member, Christy Wolvert, who is actively involved in local theater and asked her to help. She agreed," Radtke said. "I also reached out to Joel Soukkala at County Seat Theater, who has been so helpful in sharing his space and expertise with me and kids. We really couldn't have done it without both of them."

From the promotional material for Jonathan Rand's play: "Dating can be hard. Especially when your date happens to be a raging kleptomaniac, or your grandmother's bridge partner, or a mime. "Check Please" follows a series of blind dinner dates that couldn't get any worse - until they do. Could there possibly be a light at the end of the tunnel?"