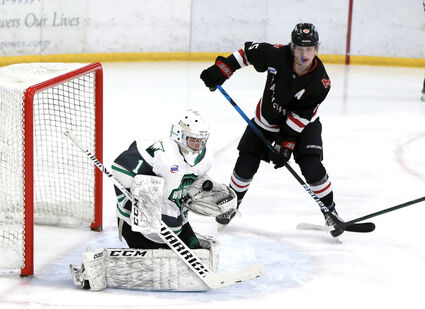 Minnesota Wilderness goaltender Matt Smith makes a save in front of Minnesota Magicians' Lucas Kanta during a January hockey game at Northwoods Arena.

If the Minnesota Wilderness are going to move on in their league playoffs, they will need to string together three straight wins pronto.

In Alaska last Friday and Saturday, the Wilderness dropped the first two games of their five-game series with the Fairbanks Ice Dogs by scores of 3-2 and 7-1. They will now try to dig out of that hole with wins at Northwoods Credit Union Arena in Cloquet Friday and Saturday. If they manage to tie the series, there would be a third game on Sunday.

In Friday's overtime loss the Wilderness held a 2-1 lead with just 27 seconds left in regulation when the Ice Dogs tied the game with an extra attacker.

"It was very frustrating because we totally dominated that game and when they tied the game, it seemed like it was only the third time the puck had gotten into our zone," said Wilderness coach Dave Boitz. "In the second period we had a 21-5 shots advantage, but their goalie played well and kept them close enough."

Cole Crusberg-Roseen scored the lone goal of the second period for Minnesota, which tied the game at 1-1. William Persson gave the Wilderness a 2-1 lead 6:51 into the third period.

The Wilderness dominated the third period as well, but a fluke shot by Tyler Stewart - which glanced off a skate and into the Wilderness net - tied the score with just 27 seconds remaining.

"We were playing so well and I still felt good going into overtime," Boitz said. "The puck just got misdirected off a skate and went in, tying the game."

In overtime the Wilderness went on the power play when Tristan Sarsland of Fairbanks got a boarding penalty just 44 seconds into the extra stanza, but it was the Ice Dogs who came up with the miracle play: scoring on a 3-on-1 rush on a shot from Brendan Miles, giving them the win.

On Saturday the crowd at the Big Dipper Ice Arena was raucous and into the game from the start. The Wilderness took three quick penalties in the first period and the Ice Dogs made them pay by scoring on all three of those penalties as they built a 3-0 first period lead.

"I think our guys and maybe our goalie - who has played extremely well for us this season - might have gotten a little shellshocked and rattled," said Boitz. "Matt (Smith) has played so well for us in goal, but after they got another early goal in the second period we took him out, but then they scored on their first two shots on goal against Konrad Kausch and it snowballed on us."

The Wilderness came out of the second period down 7-0, but in the third period they outshot the Ice Dogs 14-4, showing their mental fortitude. Eventually, Gunnar Thoreson scored to cut the lead to 7-1, but by then the game was in the bag for the Ice Dogs.

Following the game Boitz gave a message to his team about the remaining game(s) of the series.

"I told them we are not losing this series," said Boitz, who might have used an expletive in his speech. "I told the guys they have to come out to our place for the remainder of the series. If we win on Friday night, the pressure falls on them." 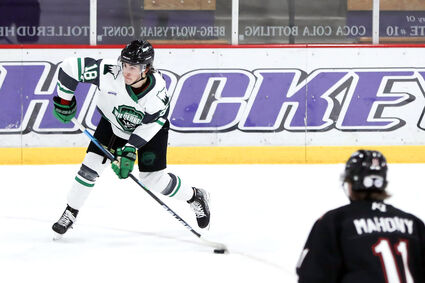 The series is the best of five games with the final three games to be played in Cloquet at Northwoods Credit Union Arena. Friday's game is scheduled for 7:15. If the Wilderness win, they will play at the same time on Saturday. Should they win on Saturday, the series would wrap up on Sunday at 5:30 p.m.

"It's pretty simple for us," Boitz said. "We should have won on Friday and we lost because we got in trouble with penalties and bad penalty killing on Saturday. All we need to do is play like we did on Friday, stay out of the penalty box, and if we do take a penalty we need to do a better job on the penalty kill."

Perhaps the final key to the puzzle, according to Boitz, is also causing traffic in front of Ice Dogs goalie Kayden Hargraves. He finished with nearly 90 saves last weekend in two games.

"We need to keep him from seeing the puck," Boitz said. "Eventually the puck will go in and we'll be fine."