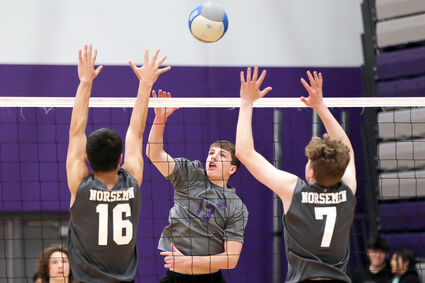 Cloquet boys volleyball returns for its fourth year as a club sport, and expectations are high. This is the first year the Lumberjacks are fielding two teams, with 19 kids signed up including, for the time, players from Esko.

Motzko has been pleasantly surprised by the ability of the first-year players. Senior Grant Nordin was top of her list. "I think for Grant to come in and be our starting setter and just really take ownership over the court, I've been really impressed with him." Other outstanding first-year players she mentioned were Caleb Hansen, Nick Lynch, Chad Hart and Spencer Teitelbaum.

Senior Ryan Tomsche - the only person to play every year since the sport started here - leads the team in terms of experience.

Motzko has set big goals for her top team this year.

"I am very hopeful that we are going to State this year," she said. "I think we've got a lot of potential and a lot of grit, and guys that want to work hard."

Motzko said she is seeing a shift in where the new players' interests lie.

"These guys have a little bit more 'want to do' volleyball skill work versus the last couple years, which was more just a bunch of guys wanting to play the game," she said. "I think it's been fun to coach some more skills."

An assistant girls coach in the fall, Motzko said it's very different coaching boys. "It's really fun, I like the dynamic," she said. "The guys in general have a lot more power, but it's channeling that power that's a little more difficult."

Motzko believes that the sport will keep attracting new players and teams, but first the Minnesota State High School League has to vote to make it an official sport. Currently it is only a club activity at Minnesota high schools. 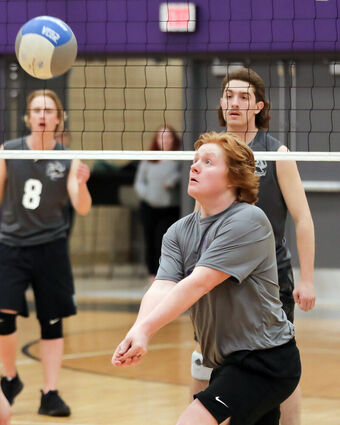 "We're really hoping that it gets sanctioned by the MSHSL," Motzko said, adding that she believes the sport would attract even more interest if it's official. "I'm really hopeful that we can make it happen this year."

The vote to sanction boys volleyball as a sport starting in the spring or fall of 2023 will be held May 10. The proposal leaves it up to the MSHSL to decide what season the sport would be played.