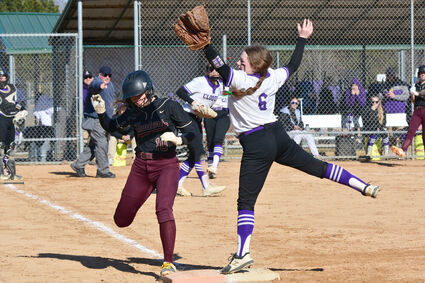 Cloquet's Sophie Diver makes a leaping catch to try and get Denfeld runner Brekken Maas out at first base as the Lumberjacks and the Hunters get a game in on a sunny afternoon in Cloquet.

After weeks of cold, rainy and snowy weather disrupting game schedules, the Cloquet softball team has been busy over the last few days.

Last Friday the Lumberjacks bombed Milaca 17-0, and Monday they pounded Virginia 10-0. On Tuesday they opened their home season with a resounding 9-4 win over Duluth Denfeld. Prior to the Milaca game, the 'Jacks had also picked up their first win of the season against Duluth Marshall last week.

"It feels great to finally get on our own field," said Cloquet coach Tyler Korby. "When we played Denfeld it was like Christmas morning. The players were all smiling and so happy to be playing a home game."

In their home win over the Hunters, Cloquet rapped out 12 hits including a pair of hits from Dana Jones, Brynn Martin, Carly Johnson, Justice Paro and Blythe Proulx.

"We talked to the girls about responding when they get behind," Korby said. "We have not had a practice on our field, and to play a game at home and respond like that was impressive."

"We have four lefties and five righthanded hitters in our lineup," Korby said. "We have a good combination of speed and power, and that gives us a well-balanced order."

Allie Jones continued her hot pitching streak in the home win by picking up eight strikeouts and allowing only four hits in the complete game win. Jones picked up her fourth pitching win in a row with the Denfeld win. Over that span, she has fanned 29 batters and walked four over 23 innings of work.

"Allie has stepped in and proven she is our No. 1 pitcher," Korby said. "Allie has been phenomenal and a real bulldog on the mound for us. She just keeps getting better and better each game. She pitches near the strike zone all the time and is doing a great job."

In the win against Milaca, the game was scoreless through two innings, but the Lumberjacks broke it open with four in the third. They then scored 13 runs in the fourth inning to put the game away as Cloquet pounded out 15 hits while allowing only three hits to the Wolves. Roena and Sophie Diver both had two hits to lead the 'Jacks offense. 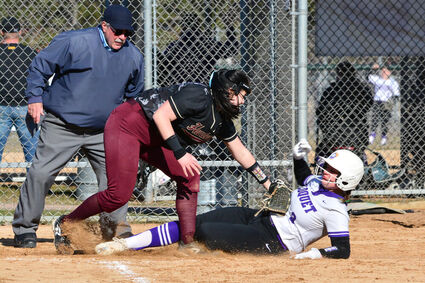 Against Virginia Monday, the Lumberjacks scored six in the first inning and four more in the fourth inning to notch the win on the road. Cloquet pounded out 12 hits in the win and Blythe Proulx homered in the game. Dana Jones, Brynn Martin, Roena Diver, and Sophie Diver all had two hits in the win.

"We are on a bit of a roll right now," said Korby. "We have a good group of kids and a solid lineup top to bottom."

The Lumberjacks were to wrap up the week with games Thursday, Friday and Saturday against Hermantown, Hibbing and Moose Lake/Willow River, respectively, after this edition of the Pine Knot went to press.