Wilderness pull off the comeback 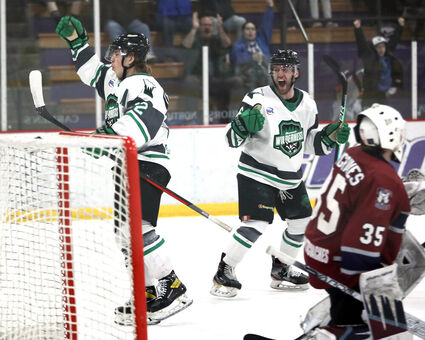 The Cloquet junior hockey team had dropped back-to-back road playoff games in Alaska to the Fairbanks Ice Dogs. Any hopes of moving on in the NAHL playoffs rode on the Wilderness winning three straight games in Cloquet on Friday, Saturday and Sunday nights. And that is exactly what they did, capping things off with an impressive 5-1 win on Sunday evening in front of a large crowd that seemingly willed the team to victory.

"The crowd support all three nights was fantastic," said Wilderness head coach Dave Boitz. "Saturday was an incredible crowd, and once we won those first two games we knew we just needed to play like we can and we would move on."

On Sunday night the Wilderness came out flying and held a 10-0 edge in shots on goal before the Ice Dogs could muster a shot on net. Unfortunately, the Wilderness turned over a puck, allowing Brady Welsch to streak in alone and fire a shot past Minnesota goalie Matt Smith at 15:24 of the first period for a 1-0 lead.

"I loved the way our guys reacted after we fell behind," Boitz said. "There was no panic on our bench, and in fact one of our guys said we need to get a goal to win anyway, so let's go out and get it back. Our guys were very composed."

"I told the guys prior to the game that the only thing standing in our way is us," Boitz said. "I told them if we play our game and get pucks behind their defense, we will win the game."

Things turned the Wilderness' way just 15 seconds into the second period when Nicholas Rexine slipped a shot past Ice Dogs goalie Kayden Hargraves to take a 2-1 lead with assists going to William Persson and Cole Crusberg-Roseen. With 1:27 remaining in the second, the Wilderness tacked on another goal when Barrett Hall scored on an assist from Jared Mangan and Max Ruoho as the Wilderness edged out to a 3-1 lead after two periods.

The Wilderness kept up the pressure in the third period and notched two more goals. The first came off the stick of Alex Pineau on an assist from Persson at the 14:19 mark, making it 4-1. Just 1:40 after Pineau's goal, Rexine made it 5-1 on an assist from Severi Sulonen.

Wilderness goalie Matt Smith was stellar all game and all weekend, as he stopped 20 saves on 21 shots while Minnesota put 46 shots on the Ice Dogs net.

On Friday the Wilderness opened the weekend series with a 4-1 win with goals from Wolthers, Rexine, Persson and Jared Mangan, while Smith finished with 27 saves on 28 shots. 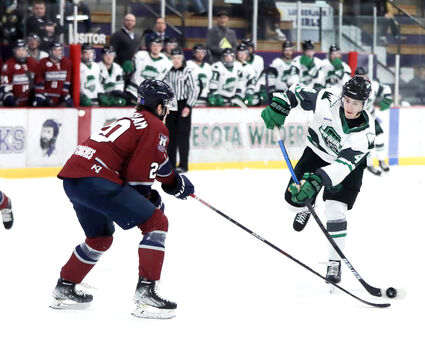 "I think Friday night was the whole key to our comeback," Boitz said. "We knew if we won on Friday it would put a lot of pressure on them since they were playing in our rink. Things really played out the way we had hoped."

In their Saturday win, the Wilderness shut out the Ice Dogs 3-0. Over the weekend the Wilderness allowed just two goals in three games against the highest-scoring team in the division.

"Our whole team played well from the forwards to the defense to our goalie," Boitz said. "Matt, our goalie, bounced back from a tough game on Saturday in Alaska."

For their efforts the Wilderness now get to turn around and play back in Alaska this weekend against the Anchorage Wolverines.

"It doesn't get any easier," Boitz said. "We will be ready and if we play like we can, I like our chances."