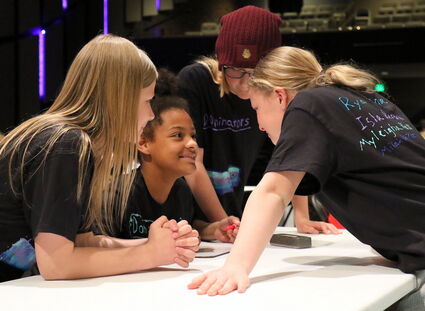 The four members of The Dominators confer before writing down their answer during the fifth annual Battle of the Books competition. The Dominators won the contest with a correct answer on the third overtime question. Team members included Isla Benson, Milah Baker, Myleigha Hall, and Rya Bagne.

When a contest needs triple overtime to determine a winner, it's usually been well-played and exciting for everyone, and maybe a little luck was involved. That's exactly what happened last Friday morning at the fifth annual Battle of the Books held in the Cloquet High School auditorium.

Fourth-grade students from Cloquet's Washington Elementary, Churchill Elementary, and a group visiting from Ely gathered to compete in front of more than 100 audience members.

After about 40 minutes of competition and the original set of 20 questions completed, two teams were tied at the top of the leaderboa...