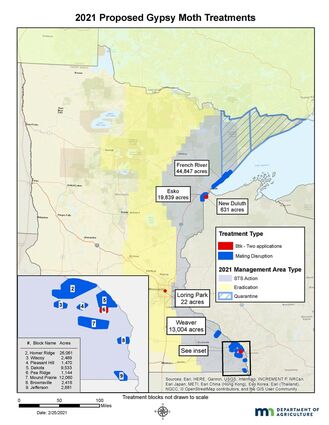 Cloquet is one of four northeastern Minnesota sites slated for treatment of spongy (gypsy) moth infestations this summer.

The four proposed treatment areas include approximately 75 acres in the city of Duluth, nearly 500 acres in Cloquet, and two areas in Lake County totaling approximately 45,100 acres.

Spongy moths are ranked among America's most destructive tree pests. The insect has caused millions of dollars in damage to forests as it has spread from New England to Wisconsin in recent decades. Spongy moth caterpillars can defoliate large sections of forest. This pest is found in most o...