'Thanks for being yellow' is new catchphrase 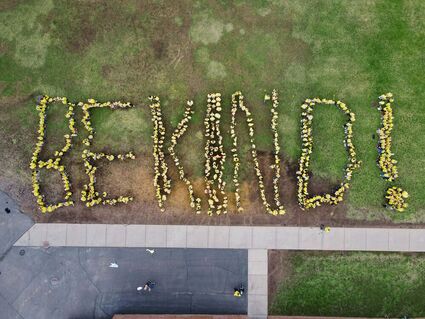 Monday was a big day for elementary students in Esko as they celebrated Be the Yellow Day at the school. It was a project to promote kindness that culminated with students in yellow shirts spelling out their initiative on the school grounds for Esko sophomore and drone operator Ethan Kilichowski.

Bridget Peterson, a media specialist at the schools in Esko, held a door open for two elementary students on Tuesday.

One of them said: "Thank you for being yellow."

Peterson beamed. "That was so cool."

"Yellow" has been the code word for kindness the past few weeks at the elementary school in a courtesy and kindness campaign dubbed "Be the Yellow," based on a national and worldwide campaign launched by a teacher in honor of one of his colleagues.

"I'm the instigator," admitted kindergarten teacher Kari Knutson on the buzz going around the school.