Cloquet High School hosted the Section 7AA True Team meet on Tuesday afternoon under sunny skies and temperatures that zoomed into the 80s. It was the first real warm day for track athletes, giving them a chance to show their abilities.

"It was kind of a day out of character as far as how this spring has gone," said Cloquet coach Tim Prosen. "It has been a rough start to the track season as far as the weather goes, but today (Tuesday) it was beautiful."

The True Team meet was established in 1987 by the Minnesota State High School Coaches Association in an effort to determine the top team based on its team depth, instead of top finishers as in a normal meet. At a True Team meet, each team is allowed to have two competitors in every event and one relay team. Every athlete scores points, with the top finishers scoring more points, all the way down to a single point for the last-place finisher.

Cloquet and Esko were the lone two local teams out in the 12-team AA meet held here on Tuesday.

In a major upset in the boys' meet, the Eskomos nabbed first place against the much bigger schools, and the Lumberjacks took second. The boys' win was even more impressive, considering that last season the Cloquet boys team finished 3.5 points short of a state True Team title - with 595 points compared to No. 1 Willmar's 598.5.

In the girls' meet, the 'Jacks took second, right behind North Branch while the Eskomos finished in fifth in the 12-team field.

"Esko is a legit team even though they were the smallest school at the meet," said Prosen. "They have a lot of good boys out for their team."

The Lumberjacks picked up second- and third-place finishes in the 1600-meter run from Miles Fischer and Jacob Mertz, respectively. Mertz also finished second in the 3200-meter run.

In the hurdles, Esko's Chad Hart picked up second in the 110-meter high hurdles while Cloquet's Miigwan Tanner-Wostrel was second in the 300-meter hurdles with Hart taking third and Hart's teammate Keone Anderson finishing fourth.

In the 4x100 relay it was Esko first and Cloquet second, while the Lumberjacks also finished second in the 4x200. Esko won the 4x800 relay with Cloquet taking third.

Cloquet's Will Turnbull finished second in the shot put while Esko's Wyatt Stankiewicz was fourth in the discus with Turnbull one place behind.

"In the distance events just about every team had to make some adjustments because it actually got hot as the day wore on," Prosen said. "The distance kids were gassed by the end of the day."

On the girls' side, Esko's Emily Rengo won the 100-meter dash while teammate Kaitlyn McConnell grabbed top honors in the 200. Cloquet's Alexa Snesrud was third in the 200 with Rengo taking fourth. Snesrud also took fourth in the 400-meter run.

Esko's Grace Shingledecker had a strong run in the 800 and finished third.

Olivia Jameson obliterated the field in the 100-meter hurdles, winning by more than a full second with Esko's Gwendolyn Lilly taking third. Jameson also had a third-place finish in the 300-meter hurdles.

"Olivia is an exceptional athlete and she is just starting to come back into her own after an ankle injury just prior to the state meet last season," Prosen said.

Cloquet went 1-2 in the discus with Bella Harriman and Seija Suominen, respectively. 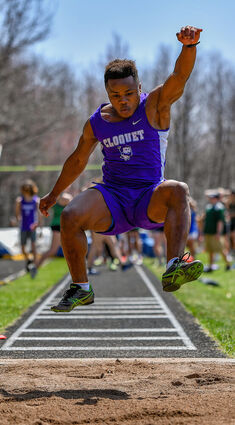 By virtue of winning the boys' event, the Eskomos automatically qualify for the True Team state meet. The top teams from each of the state's eight sections automatically qualify for the state meet, as well as four teams which finished second in their sectionals. That means both the Lumberjacks boys and girls team still have a chance of competing there too.

"We'll have to see, but we still have a shot," said Prosen.