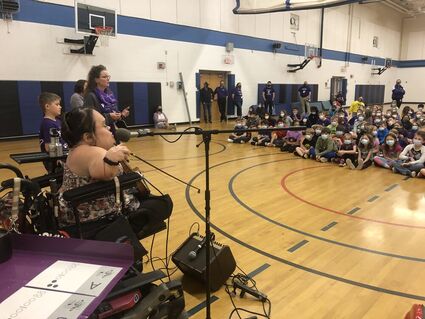 Duluth musician Gaelynn Lea performs in front of half the Washinton Elementary School student body Thursday, singing with the students with assistance from her nephew, Gabe, and music teacher Katy Buytaert. The students were captivated by the fiddling singer-songwriter.

Duluth musician Gaelynn Lea not only performed for the entire student body at Washington Elementary last Thursday, she had a conversation with them: 250 students at a time in two sessions.

By then nearly every child in the gym has a hand up.

"Music helps us feel emotions in a way that's safe for us and then we don't have to go out and yell at anyone, because we can experience our emotions with music."

A trained violinist turned fiddle player and songwriter, Lea rolled into the school gymnasium Thursday to hugs from her nephews, Gabe and Micah White, who were thrilled to see their aunt play.

"I'm Gaelynn Lea, or 'Aunt Gaelynn,' as Gabe and Micah call me," she told the Washington students, giving the boys some time in the imaginary spotlight with her.

She explained to the kids that she was born with brittle bone disease. "It doesn't hurt, but before I was born I broke some bones and they healed wrong," she said. "See my arms and legs, they're bent, so I couldn't walk. So I've been using a wheelchair since, goodness, since I was two years old."

Lea entertains and educates as she takes the kids on a stroll through her own musical journey, which started in fifth grade when her teacher helped her figure out how to play the violin, by holding it more like a cello.

"It's called adapting, doing something differently so it works for you," she said. She holds the violin upright, anchoring it when needed with her left foot, which peeks out from her dress.

Hailing from Duluth, Lea is now a nationally known musician. Her fiddle playing and singing on her original song, "Someday we'll linger in the sun" helped win her first place in National Public Radio's second-ever Tiny Desk Contest - beating close to 6,000 other entries and bringing her a much wider audience.

She plays the song midway through her performance, after showing students how she uses a device to loop her music, layering sounds, becoming her own one-person band, capable of both playing and singing for an audience. Her haunting voice rises and falls, dancing through the loops of fiddle music.

"She captivated the audience," Washington music teacher Katy Buytaert said. "Both staff and students were moved by her music."

"She described how we can use music when we are mad, sad or happy. She also taught us that people can take different feelings and messages away from the same song, depending on what they personally hear," Buyteart said. "This all fits another Washington motto (brought into our building by retired kdg teacher Mary Bakken): 'Different is OK.'"

Lea said fiddlers learned songs by ear traditionally, having them sing an example back at her. She plays "Angelina Baker," an Civil War era song, and asks the kids to picture people dancing.

She plays another tune, asking the kids to raise their hands when they recognize the music. As the song continues, more and more hands go up. It turns out she was playing the music for three songs - "Twinkle, Twinkle Little Star," "Baa, Baa, Black Sheep" and the ABC song - with the same melody.

Students prepared for the performance, and it showed Thursday, despite the large numbers in the gym. They had studied concert etiquette, they'd seen videos from Lea's YouTube channel and they knew the words to "Let the World Unfold," breaking into applause when she announced the song, which they performed with her, echoing the chorus back to her.

She is relaxed and conversational, engaging.

She asks the kids how many of them have written a song. Hands go up for about a third of them. "You guys are awesome," she said, encouraging them to record any ideas on their phones and telling them not to judge it. "I didn't start writing music until I was 27." 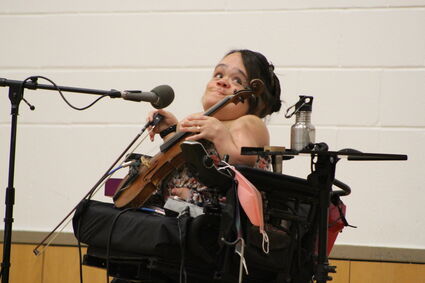 Gaelynn Lea had a good rapport going with Cloquet students last week, when she visited both Washington and Churchill schools as part of the YourClassical MPR's Class Notes program.

In the 11 years since then, her fame has grown.

More recently, Lea worked in New York City, composing original music and one song for the Broadway revival of "Macbeth," featuring Daniel Craig. "I think that's my favorite song right now," Lea said in a question-and-answer session after her performance.

The questions come fast and furious, and are moderated by Buytaert. "Do you like playing violin or singing songs better?" "What is your process of writing a song?" they ask.

She loves both, but singing makes her more nervous and more excited. Most song ideas pop into her head when she's in the shower, or riding the bus, just random places.

When the time runs out, Buytaert promises they can do more follow-up with Lea via email in the coming week.

"That would be great," Lea said, getting a final hug from Gabe as the students left the gymnasium.