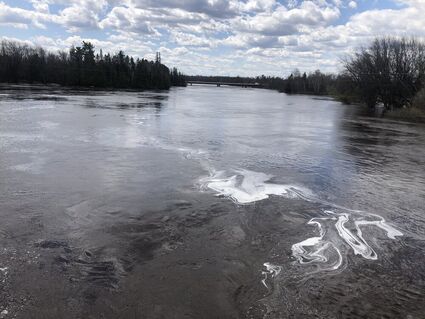 The St. Louis River hit flood stage last weekend, quietly flowing over its banks at Scanlon before violently erupting through the Minnesota Power dam at Thomson/Carlton in dramatic fashion downstream.

The St. Louis River hit flood stage last weekend, quietly flowing over its banks at Scanlon before violently erupting through the Minnesota Power dam at Thomson/Carlton in dramatic fashion downstream.

According to the National Weather Service, the river was expected to crest at 11 feet, 6 inches in Scanlon just after midnight Saturday, before falling below flood stage (10 feet, 6 inches) by early Wednesday, May 18. The weather service called it "moderate" flooding.

Marcie Stohlberg, who owns the Knife Island Campground east of the river at Scanlon, called it higher than normal, but she's seen far worse.

Across the river from her campground, the river was creeping up the grassy lawn of the River Inn, and actually flowing through the nearby Minnesota Whitewater Rafting outbuilding and shed. Stolberg said she can remember water flowing through the rafting buildings at least 40 different times.

"Anytime the water is high, the river is flowing through those buildings," she said. 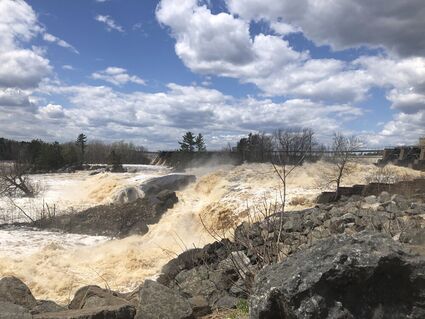 She pointed to a bridge from her campground where the river water was flowing only a foot or two below the bridge deck. During last year's drought, the bridge crossed a nearly dry gully.

Stolberg said her campsites were still "high and dry" Sunday. She wasn't worried, but she was still keeping an eye on things. She knows what to look for.

"Anytime the water reaches this spot, I know it's going to fill the woods," she said, indicating a still-dry patch of grass between the campground driveway and the river.

The parking lot by the Thomson Dam was busy Sunday with people coming to check out the water flow and walk along the river and other nearby trails on one of the first really nice spring days.