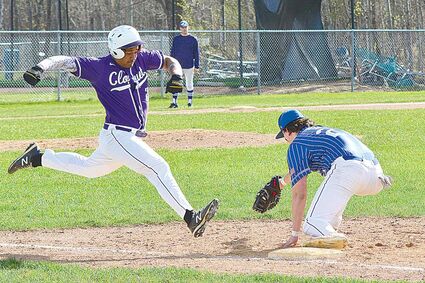 South Ridge first baseman Christian Pretasky gets the out as Cloquet's Alexander Omenge stretches out to try to get there first Monday afternoon in Culver.

A four-run first inning was enough to propel the South Ridge boys baseball team to a 4-1 win over the Cloquet Lumberjacks Monday night in Culver.

The game marked the return of Tyler Olin to the school and players he coached to their first state tournament a few years ago. Olin is now the head coach in Cloquet, while Aaron Weber took the helm of the Panthers program after Olin's departure and has continued to build the program at South Ridge.

"It was actually very enjoyable for me to be back," Olin said. "To see some familiar faces and some current players, and some former players who are now alumni, and even some that were past students of mine."

After the Panthers held Cloquet scoreless in the top of the first inning, they came out and parlayed two walks, a bunt and a couple of hits into a four-run inning and a 4-0 lead.

"We played well and it was a nice game to bounce back after a couple of losses on Friday," Weber said. "We lost to two real good teams on Friday in New York Mills and Wadena, so to bounce back against a good Cloquet team was really good for the guys."

Aaron Bennett picked up the pitching win for the Panthers by keeping the Cloquet bats in check during his six innings of work. In those six innings, he struck out nine and allowed only two hits.

"It was his best game of the year," Weber said. "He controlled his fastball and his curveball and attacked hitters."

Those sentiments were echoed by Cloquet coach Olin.

"I thought Bennett pitched well for them," Olin said. "He got ahead and trusted his fastball, and he changed speeds effectively, which kept us off balance."

While Bennett was on his game, so was Cloquet pitcher Kade Kolodge. The Cloquet junior overcame a tough first inning and held the strong South Ridge lineup in check after the four-run first inning.

"Once Kade got through that first inning, he settled down and pitched well," Olin said. "We had our chances in the seventh, but we didn't come up with the key hit." 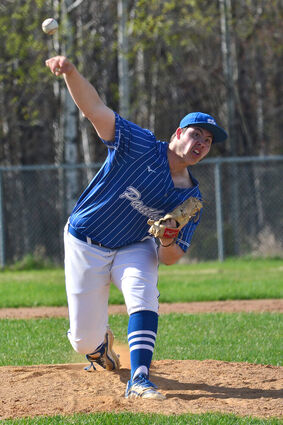 Trailing 4-0 entering the final inning, the Lumberjacks managed to get a run after a leadoff single. They advanced another runner to second base, but Josiah DeLoach - who pitched the final inning for the Panthers - was able to hold off Cloquet and finish the game for the win.

The Lumberjacks managed just three hits in the game with Kollin Bonneville, Dayne Painovich and Matt Erickson coming up with one hit each. Erickson scored Cloquet's lone run in the game.

South Ridge picked up six hits against Kolodge with Christian Pretasky knocking out a pair of hits while Jaxson Bennett, Wyatt Olson, Aydin Archambeault and Aaron Bennett each recorded one hit in the game.

The win improved the Panthers record to 7-3, while the loss for the 'Jacks drops them to 2-8 on the season.