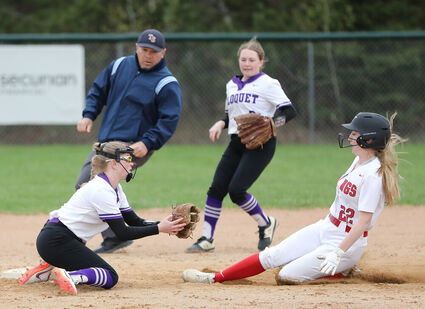 The Cloquet girls softball team is playing its best ball of the season, and just in time for playoffs.

Cloquet beat North Branch 7-2 at Braun Park last Thursday, May 19. The win was a sweet one for the Lumberjacks, as the Vikings are the defending Section 7AAA champs.

"The girls executed our philosophy really well. We like to play small ball and run and put pressure on teams," Korby said. "We have some kids who can really book; they just kept pushing and pushing. The pressure seemed to really affect North Branch."

Cloquet's speed was a factor in rounding the bases and in the outfield. "In my opinion, we have the fastest outfield in the area, if not the state," he said.

Cloquet pitcher Allie Jones took the win on the mound. Dana Jones, Brynn Martin and Carly Johnson all had multiple hits Thursday. The win put the ߵJacks at 11-5 on the season. 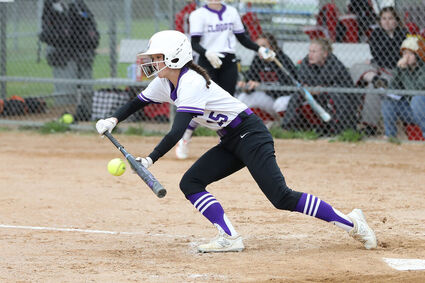 Cloquet's Brynn Martin drops down a bunt for a hit during Thursday's softball game against North Branch.

Cloquet's first playoff game against Grand Rapids was bumped to 5 p.m. Thursday because of rain Wednesday; if they win, the ߵJacks will play again at 11 a.m. Saturday, also at Braun Park.

"We can really make a run at this, the girls just have to keep pushing," he said. "We just gotta throw strikes, make plays, defend the bunt and have timely hitting. The girls are as confident as they've been all season. As a coach, that's all you can ask for."

Update: The Lumberjacks beat Grand Rapids 16-12 in a rollercoaster first round of the playoffs in a game played Thursday, postponed from Wednesday because of weather. They are scheduled to play at 11 am Saturday at Braun Park.