Unrequited 'something' at heart of latest comedy 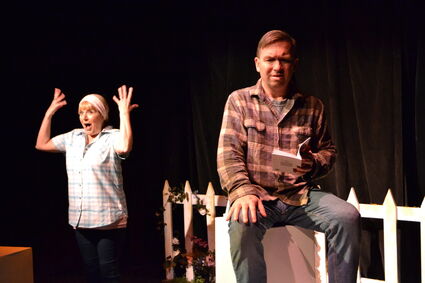 Brian Dowd, played by Rick Breuer, and his neighbor, Beth Finnegan, played by Ruthie Breuer, verbally joust in the comedy "Jerry Finnegan's Sister" coming to the County Seat Theater stage this weekend and next. Contributed photos

Things are moving quickly at the County Seat Theater these days.

Opening today in person and with view-on-demand is the comedy "Jerry Finnegan's Sister."

It's been a busy few weeks for the community theater, said general manager Joel Soukkala.

"Due to Covid-19 cases in the previous production pushing back its opening date, the actors and crew in 'Jerry Finnegan's Sister' have had a shortened time span to get ready for their opening night," Soukkala said.

Less than two weeks after County Seat's last production, "Suite Surrender," the set was struck, a new stage was set, lights were repositio...