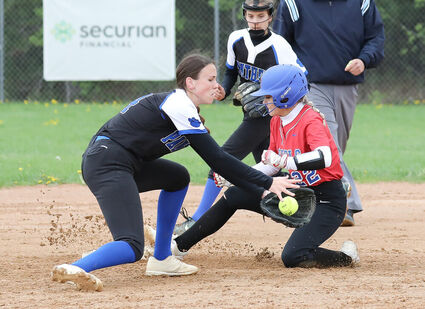 The Section 7A softball tournament has found its way to the final two teams as tournament action continued Tuesday at Braun Park in Cloquet. Defending section 7A champion Cherry will face Moose Lake/Willow River Thursday with a trip on the line to Caswell Park in North Mankato next week.

Thursday, May 26, the double-elimination portion of the Section 7A playoffs began in Grand Rapids. Four Polar League schools opened play: Carlton/Wrenshall (No. 5) versus Barnum (No. 4), and South Ridge (No. 9) facing ML/WR (No. 1).

Barnum fell in their first game to Carlton/Wrenshall by a final score of 7-0. ML/WR knocked off South Ridge by a score of 10-0 to move on to face the Raptors in a battle of two unbeaten teams later in the day.

The Rebels and the Raptors fought a pitching duel before Carlton/Wrenshall prevailed with a 2-1 victory as Maelyn Pokornoski scored the game-winning run in the top of the seventh inning.

With six teams still alive following Thursday, two elimination games kicked off the action at Braun Park at 11 a.m. Tuesday, May 31. The Rebels knocked off South Ridge for the third time this season with a 10-0 win.

"I could not have been prouder of this group, they are young and work hard; it's tough to take the loss, but we can use this as a learning step going forward," said Panthers head coach Merle Kelley.

The ML/WR victory over the Panthers set up a 1 p.m. game between the Rebels and Silver Bay, who had knocked off North Woods by a 9-1 final score. The Rebels came out fast and took advantage of three Silver Bay errors to finish with a 14-1 victory. That meant the Rebels would face either Cherry or Carlton/Wrenshall in another elimination game at 3 p.m.

Meanwhile, the Raptors made it to the semifinals at 1 p.m. Tuesday where they fell to Cherry 3-2 in a close battle Tuesday. The Tigers scored one early run in the fourth inning before the Raptors responded with two runs in the top of the fifth to take a 2-1 lead. The defending section champions would continue to fight as they tied the score at 2-2 in the bottom of the sixth and eventually scored the game-winning run in the bottom of the seventh. That win sent the Raptors to a single-elimination game versus the Rebels and the Tigers to the section championship game.

The Raptors were confident they could knock off the Rebels again. The winner would advance to meet Cherry for the championship

The game was tight in the first few innings with the Rebels scoring the only run through three innings of play to lead 1-0. The Rebels took advantage of a Raptors error in the fourth inning to add four runs to their lead as they built up the 5-0 difference. 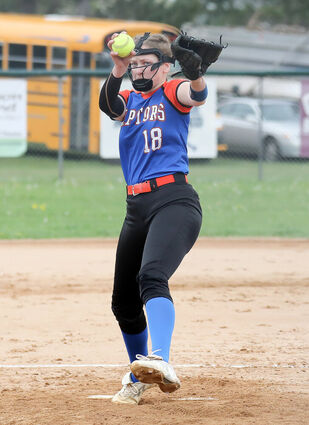 Carlton/Wrenshall pitcher Abby Mitchell throws a pitch during a Section 7A playoff game with Cherry at Braun Park on Tuesday.

Leading 5-0 heading into the bottom of the sixth inning, ML/WR exploded for five runs to 10-run the Raptors and come away with the 10-0 victory to advance to the section finals.

The championship game is scheduled for 3 p.m. Thursday at Cloquet's Braun Park after this issue of the Pine Knot News went to press.