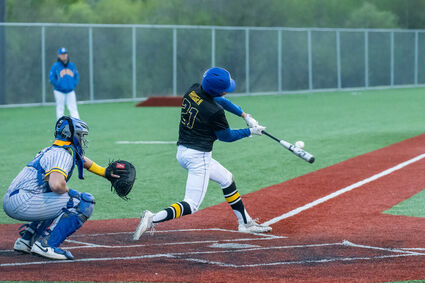 Starting pitcher Sam Haugen with a base hit early in the bottom of the first inning for the Esko during section 7 action at Proctor High School.

Esko opened up section 7AA baseball action with a pair of victories Tuesday afternoon and evening. The top-seeded team was scheduled to face Rock Ridge at 2 p.m. Thursday at Superior High School after this issue of the Pine Knot News went to press.

The Eskomos opened 7AA play with a 9-1 victory over Crosby-Ironton. Esko scored in each of the first five innings and built up an 8-0 lead before the Rangers scored their first run of the contest.

Cale Haugen and Ty Christensen each had three hits in the win over Crosby-Ironton. Both players added two RBIs for Esko. Cale, along with Sam Haugen, and Owen Wilson also scored twice for Esko in the win.

Dylan Marciluionis was the winning pitcher for Esko, going five innings, allowing just one run (which was unearned), and giving up just two hits.

The Eskomos scored 14 runs in the second game, beating the Tigers by a final margin of 14-4. Bryce Hipp and Sam Haugen each ended with three hits in the Esko victory. Sam Haugen was a home run shy of hitting for the cycle, and Hipp finished with 4 total bases.

"We really got out bats going today, especially in the second game," coach Ben Haugen said. "We had 11 hits in the Crosby-Ironton win and pounded out 15 in the win over Rush City which gave us two big innings and allowed us to 10-run the Tigers."

Two five-run innings for Esko in the third and fourth innings caused the most damage as the offensive outburst was too much to overcome. Cale Haugen and Hipp each scored three times in the win, and Finn Furcht, Tyler Christensen and Issak Sertich each drove in two runs.

"We still have a few things to cleanup," coach Haugen said, "but I am very happy with how these kids work hard every game and never quit."

With the wins, the Eskomos improved to 19-3 on the season and will have won six straight games entering Thursday's match-up with Rock Ridge. The winner of that game will go to the 7AA semifinal game at 2 p.m. June 7 at Wade Stadium in Duluth.

Through four and a half innings, the Rebels were hanging tough with Proctor in the Section 7AA baseball playoffs. Unfortunately for Moose Lake/Willow River, the Rails put up seven runs in the bottom of the fifth to race away to a 12-4 victory and eliminated ML/WR from the playoffs.

"We came out and put up three runs and led 3-1 after one inning," said Rebels head coach Spencer Clough. "We were feeling good. Even after giving up three runs in the third inning we felt we were still in the game."

Things changed in the fifth when the powerful Rails lineup started playing small ball. They took advantage of the Rebels' inability to handle the bunt to take extra bases and put pressure on ML/WR. 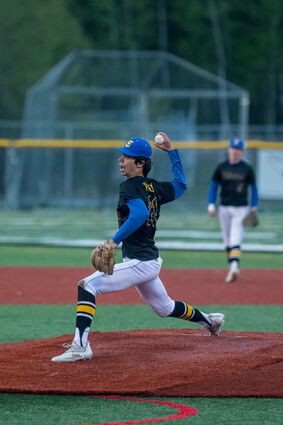 "Things fell apart in that inning," Clough said. "They took advantage of it and that's the sign of a good team."

Sam Dewey and Reese Bode both had two hits. Dewey had a triple among his two hits and Bode a double.

ML/WR finishes the season with an 11-8 record.

"I am proud of the way we hit and the way our seniors improved," said Clough. "Four of our five seniors hit over .300 this season and to see the jump they made was impressive. I also think our pitching was much improved. We didn't walk as many batters and we made teams earn their bases and