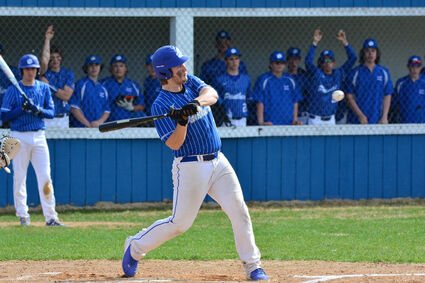 The South Ridge Panthers dugout watches as Aydin Archambault gets a hit during a game earlier this month against the Cloquet Lumberjacks.

As the defending champions and the No. 1 seed in the Section 7A baseball tournament, South Ridge will be a tough out for any team.

On Tuesday, May 31, the Panthers began defending their crown by enjoying a first-round bye and then notching a 9-1 win over Cromwell-Wright, the No. 9 seed. "We played well overall," said Panthers head coach Aaron Weber. "We came out hitting right away, but our bats slowed down as the game wore on."

The Panthers threw four pitchers in the game including starter Aaron Bennett, who is the ace of a formidable staff.

Both Aaron Bennett and Carter Anderson had two hits, a triple and single for Bennett, and Anderson stroking a double and single to lead the hitting barrage. The Panthers scored four runs in the first and five runs in the second as they cruised to the win.

"Everything went well today," Weber said. "We pitched well, hit the ball and got the early lead and played some good defense. Because we've had a nice run over the last few years we are used to seeing the best out of other teams. That's a good thing and can only make us better."

Despite the eight-run win, Weber does see some things that his squad needs to work on as the tournament progresses.

"We need our bats to wake up a little bit," said Weber. "If we can continue to get good pitching, play solid defense and string some hits together, we'll be fine."

South Ridge started the game with their ace Bennett on the mound and then threw Josiah Deloach, Ben Petrasky and Gavin Willeck against the Cardinals.

After the win on Tuesday, the Panthers are now 14-7 on the season and were scheduled to play at 2 p.m. Thursday against the winner of Chisholm and MIB after this issue of the Pine Knot News went to press. The winner of Thursday's game will play in a semifinal game Tuesday, June 7, with the championship game set for June 9.

The Cardinals baseball team is still alive in the Section 7A baseball tournament. Cromwell-Wright pulled off an exciting first-round win Tuesday over Silver Bay, then dropped a second-round decision to the No. 1 seeded Panthers, but they will get another chance to play on Thursday.

"We are thrilled," said Cardinals head coach Dean Levinski of the team that regained its home field and varsity squad just this season. "We've been trying to build a program here for quite a while, and to get a playoff win was just amazing."

Leading the team to the win was eighth-grade pitcher Eliyah Belden, who fought through some first-inning struggles to get the 6-4 victory over Silver Bay.

"We gave up three runs right away, but then we settled in," Levinski said. "After that first inning, he threw a lot of strikes and gave us a chance to get back in it, and the guys came around with the bats."

Andrew Kachinske scored the first run of the game for the Cards in the second inning. In the third inning, the Cardinals tacked on runs from Dylan Nyberg, Tate Blomquist and Belden, giving them a 4-3 lead. The Mariners added a run in the fourth inning, tying the game at 4-4.

While the Cards were rallying, Belden was slamming the door on the Mariners offense. Cromwell-Wright found a way to pull out the win in the seventh inning, when Blomquist led off with a single and then Belden tripled to score Blomquist, making it 5-4. Kachinske then singled to score Belden, making it 6-4.

The Mariners had a threat with two runners on in the seventh, but the Cards wiggled out of the jam and took the win.

In second-round action, Cromwell-Wright fell 9-1 to South Ridge. The No. 1 seed scored four in the first and five in the second as they cruised to the win.

"They are just a very big and physical team," Levinski said. "We had a couple of errors in the first inning. Falling behind by that much against a team that good is tough. Dylan Nyberg started for us, but we had to bring in Brady Dahl, and he threw very well. It was a big day for us because we got through the day using only three pitchers and we will be able to pitch Brady on Thursday in the next round."

Varsity baseball returned to Cromwell this year for the first time since 2010, after the program was resurrected a few years ago with junior high ball. From 2011 through 2018, Cromwell-Wright athletes traveled to McGregor to play baseball.

Barnum will have to climb up the ranks of the elimination bracket to advance, after splitting games Tuesday in Hoyt Lakes. After nipping Deer River 4-3, the Bombers lost to Ely 7-6 in a wild game.

The Bombers were scheduled to play Northeast Range at 4:30 p.m. Thursday, June 2 at Mesabi East.

Despite collecting just five hits against Deer River, the Bombers made them count with the four runs. Levi Hartman had two RBIs to lead the Bombers.

The hits remained sparse in the Ely game but the Bombers scored enough to keep it close. Ely needed some heroics in its last at-bats to get the 7-6 win. Parker Mott and Murray Salzer picked up RBIs for the Bombers.

Wrenshall wrapped up its baseball season Tuesday afternoon with an 18-0 loss at the hands of the Cherry Tigers in Cohasset.

Going into the playoffs, the Wrens were the No. 15 seed while the Tigers were the No. 2 seed and one of the two favorites (South Ridge the other) to vie for the 7A title.

"There's a reason they got the No. 2 seed," said Wrens coach Aaron Lattu. "They are a good hitting team and they find a way to get the job done."

While the Tigers came out and sprayed the ball around the field, the Wrens were struggling to get the bat on the ball. They could muster only a pair of hits in the game.

"They pitched well," said Lattu. "It was a tough year and we just had too many holes to fill."

The Wrens struggled with defense early in the season, but seemed to get better in that department as the temperatures warmed. Playing with a young team against high-caliber squads proved to be more than they could overcome.

Among the bright spots for the Wrens was senior first baseman Joel Lembke, who finished the year with a batting average of .500 and an on-base-percentage of .589.

"Joel had a pretty impressive year at the plate," Lattu said. "We lose some really good seniors, pretty much our entire infield."

Lembke will graduate, as will shortstop Joey Mills and third baseman Corey Despot. Wrenshall wrapped up the season with a 1-14 record.

Playing against the No. 4 seeded MIB Rangers Tuesday, Carlton had its hands full. The No. 13 seeded Bulldogs gained a 1-0 lead in the top of the first, but they were unable to sustain the momentum as they dropped an 8-5 decision which eliminated them from the playoffs.

Despite the early lead, the Bulldogs found themselves in a tough situation when the Rangers went up 7-1 due to some shoddy fielding by Carlton.

"We had pretty good pitching from our pitcher Joey Solomon," said Bulldogs head coach Ryan Schmidt. "We had five errors and that's just too many, and that plagued us all year."

In the fifth inning, Carlton went on a run, with scores by Solomon, Aaron Ermatinger (with his second), Sam Ojibway and Noah Olsen.

"That was a nice rally for us and got us back to within 7-5," Schmidt said. "Unfortunately they came out and got another run in the bottom of the sixth."

The Bulldogs struggled to slow down the Rangers, who used their speed to take extra bases as they ran the base paths hard.

"They were really strong on the bases," said Schmidt. "They took advantage of their speed and we struggled to stop them; you add that along with five errors, and that's a tough hole to dig out of."

Carlton finishes the season with a 3-13 record and will lose six seniors to graduation.

"We had only three outside practices all season," Schmidt said. "We had nine games in 11 days and just never were able to get on the field to practice, and that's tough. Our guys played hard, they gave everything they had, they battled back to get themselves in a position to win, but just didn't get the job done. It was there to take, but we just couldn't get it done."