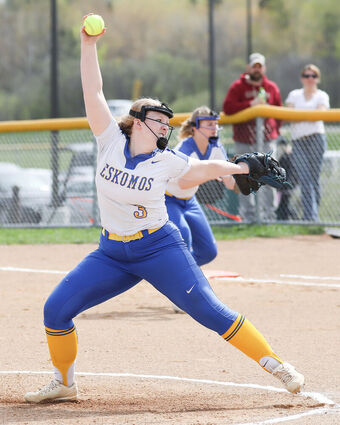 After starting the season 2-4, the Esko softball team went on a roll and entered the 7AA Section playoffs as the No. 2 seed. The Eskomos opened the playoffs with back-to-back wins before losing to Eveleth-Gilbert and dropping to the losers bracket.

On Tuesday, the Eskomos put up two more wins before finally bowing out of the playoffs with another loss to Eveleth-Gilbert.

“We finished with an 18-7 record this season and three of those losses were to Eveleth-Gilbert,” said Esko coach Huff Emanuel. “We just ran out of gas today.”

On Tuesday, May 31, Esko opened with a 10-8 win over the Aitkin Gobblers, the No. 6 seed in the playoffs. The Eskomos sprinted out to a 10-2 lead, but found themselves in trouble in the late going.

“We started Mikayli Marciulion on the mound and then we brought in a younger pitcher and Aitkin, to their credit, fought back,” said Emanuel. “I give our kids credit, they found a way to win, and in the playoffs that’s what counts.”

In their second game Tuesday, the Eskomos fell behind No. 5 seed Rush City and trailed 6-4 entering the bottom of the seventh inning before rallying for the 7-6 win.

“Amber Carlblom pitched the second game for us and kept us in it,” Emanuel said. “Our girls kept battling and found a way to win.”

The Esko season came to an end in the third game of the day Tuesday when they fell 15-5 to the Golden Bears of Eveleth-Gilbert. After taking a 2-0 lead in the bottom of the first inning, the Eskomos gave up 15 straight runs before making a small run of their own late in the game.

“These kids played with a lot of heart all year,” Emanuel said. “They never quit. Their motto was ‘family’ and they truly were a family. There was no drama and the seniors really pulled this team together, everyone bought in and they played with guts and commitment.”