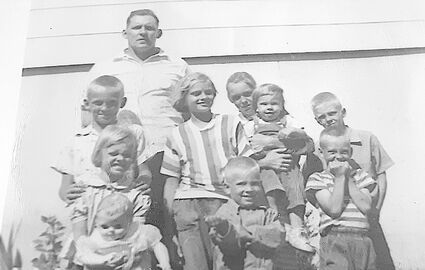 Do you recognize this family? Stephen McClellan found this photo in the basement of the former Finnish church at 103 10th St. in Cloquet, now the Alano Club. There are six names written on the back of the photo along with “Dad,” but there are eight kids in the photo. The names and ages are John, 6; Galen, 2; Ron, 12; Marla, 4; Norma, 1, and Lola, no age written. That’s a good head start. If you have any information, send it along with “History” in the subject line to [email protected]

We know more about the family pic (right) that was discovered in a former church in Cloquet and was the subject of last week’s History Mystery. The baby in the picture, Norma, who lives in Cloquet, said those are her siblings, children of William and Ina Sillanpa. They had 11 children and lived in the Denfeld area of Duluth. Norma says the photo is from 1956 and one of the unnamed children is Larry. (The others listed on the back of the photo are Marla, Ron, Galen, Lola and John.) An infant child, Alvin, had passed away and Jerry and Dan were born after the date of the photo. Norma says she has no idea how the family picture ended up at the former Finnish church known today as the Alano Club.