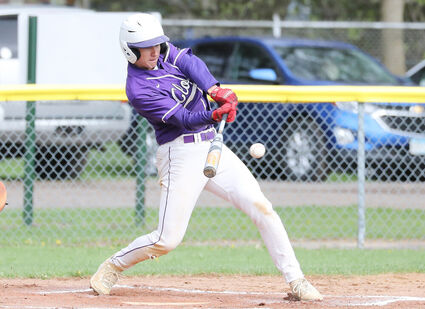 The Cloquet Lumberjacks baseball team was eliminated from the Section 7AAA tournament in the second round Thursday in a 5-2 loss to the Bluejackets in Hibbing.

After giving up a single run in the first inning, the 'Jacks gave up three more in the third inning and fell behind 4-0. Alec Turnbull got the nod on the mound and pitched well, but the Lumberjacks defense struggled to make plays, leaving the door open for Hibbing.

"I thought Alec did a nice job pitching for us," said Cloquet head coach Tyler Olin. "He did his job and he gave us a chance."

Cloquet pitching allowed just five hits in the game, but three errors added to the problem. Turnbull went five and a third innings with Pat Dunaiski pitching the final two thirds of an inning.

Trailing 4-0 entering the top of the sixth inning, the 'Jacks got a pair of runs from Turnbull and Dayne Painovich to cut the lead to 4-2, but Hibbing answered with a run of their own in the bottom of the inning to go up 5-2. The Lumberjacks were unable to score in the top of the seventh inning and the game ended in favor of the Bluejackets.

Turnbull aided his own cause with a pair of hits, while Painovich, Kollin Bonneville, Marshall Hayes and Alex Yrjanson each had a hit.

Cloquet struggled at the plate in the playoffs and a lack of run production caught up with them.

"I don't know if the pressure got to us or not," said Olin. "I thought our hitting was our strongest point throughout the year, but it isn't easy in the playoffs when you see the best pitchers of each team."

The loss ends the season for the 'Jacks and dropped their record to 4-16.

"I told the players the biggest thing that sticks out for me is how slim the margin for error is," said Olin. "Just a play here and a play there would have made a difference. For us, it was our lack of defense this season. Other teams took advantage, and had we cleaned up that part of the game we should have been a .500 team."

Cloquet graduates four players as well as Jack Sorenson, who was injured during the football season and was unable to play this spring.