Cloquet's Jordan Aultman competes in the 100-meter dash at the Section 7AA finals on Saturday in North Branch. Aultman won the race and a state berth with a time of 11.31 seconds.

For the first 17 of his 18 years coaching Cloquet boys and girls track, head coach Tim Prosen and his team have been the small fish in the big pond. Cloquet was among the smallest schools in the state in Class AA. That all changed this year when the Minnesota State High School League went to a three-class system for track, leaving Cloquet in AA and moving the largest schools into Class AAA.

Last week the Lumberjacks benefitted from competing on a more-even playing field by having 23 athletes qualify for the state tournament. It's an enormous jump from the two athletes Cloquet sent to state last year.

"It was a great way to finish our season," Prosen said. "Our athletes and coaches work so hard. What I am proud of is that we have sprinters, distance runners, mid-distance, throwers, jumpers, and hurdlers. We are a balanced team and sent kids in all of these events. This is a testament to our coaches and their hard work."

In total, Cloquet will send 11 girls and 12 boys to this year's state meet. Both first- and second-place finishers qualify for State.

First-place winners for the Cloquet girls included Lydia Stone in the 400 meters, Olivia Jameson in the 100-meter hurdles and high jump, Taylor Wick in the triple jump and Seija Suominen in the discus. Cloquet got second-place finishes from Erin "Soup" Loeb in the 800 and Wick in the high jump. Bella Harriman was second in both the shot put and discus.

"Lydia Stone, she ran the race of her life and won the 400. We knew she had it in her, she crushed it," Prosen said.

The Lumberjacks also had a first place in the 4x800 relay from Katie Turner, Loeb, Lauren Hughes and Caley Kruse. Joining those four at the state meet will be alternates Alexa Shepherd and Amelia Allen.

"The girls 4x800 ran an incredible and strategic race," Prosen said. "Caley Kruse ran a brilliant anchor leg, Katie Turner got us in a good place to start, and Erin "Soup" Loeb and Lauren Hughes ran incredible PRs to get us the win."

This will mark Jameson's third trip to State for the high jump and 100-meter hurdles; last year, she also qualified in the triple jump.

Jordan Aultman took first place in the 100 meters and Jacob Mertz came in first in the 3200 to help lead the Cloquet boys to their second-place team finish. 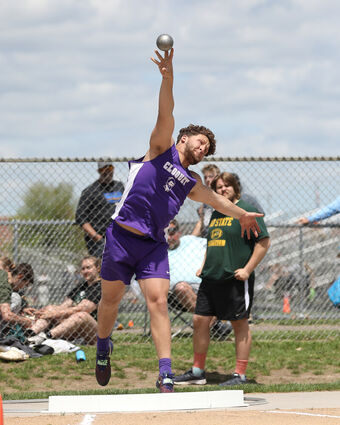 Cloquet's Will Turnbull throws the shotput during the Section 7AA finals at North Branch. Turnbull finished 4th in the meet with a long throw of 47 feet 3 inches.

The Cloquet 4x100 relay team of Xavier Anderson, Alex Petersen, Aultman and Reese Sheldon finished in first place and earned a trip to the state meet. Alternates for the 4x100 who will also be part of the state team include Miigwan Tanner-Wostrel and Elijah Aultman.

Activities director Paul Riess said the big haul at sections meant he had to arrange for a bus versus a van and more hotel rooms than usual. "That's a good problem to have," he said.

Beyond the state qualifiers, the Lumberjacks had numerous athletes who finished in top five spots in their respective events. The Class AA state meet is set for Friday and Saturday at St. Michael-Albertville High School. Watch the Pine Knot News Facebook page for news from the state meet this weekend.