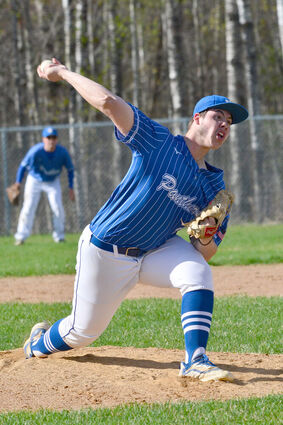 South Ridge pitcher Aaron Bennett unloads a pitch earlier this season. On Tuesday, Bennett was the starting pitcher and scored a solo homerun to complete the Panthers' 7-2 win over Cherry to advance to Thursday's championship game.

Don't look now, but the South Ridge Panthers are one game away from their fourth straight tournament championship after a 7-2 win over Cherry Tuesday afternoon in the Section 7A playoffs. The 2 p.m. game was at Mesabi East High School in Aurora.

Cherry got on the board first when leadoff batter Isaiah Asuma was hit by a pitch, stole second and eventually scored on a ground ball out.

"We weren't worried because the guys knew we needed to score a run to win anyway," said Panthers head coach Aaron Weber. "The guys kept their composure and finally got things rolling on offense in the third inning."

While the Panthers were waiting to get their bats going, starting pitcher Aaron Bennett was doing a fine job of holding the Tigers off, giving his squad a chance to respond.

"I have a lot of confidence in all of our pitchers and Aaron did his job," said Weber. "Getting three runs in the third inning was a big key for us."

Christian Pretasky, Kaden Lane and Wyatt Olson all walked to start the third inning. With bases loaded, Carter Anderson reached on an error, allowing Pretasky to score to tie the game at 1-1. A sacrifice fly by Bennett scored Lane and finally a base hit by Aydin Archambault pushed Zach Morse across for a 3-1 lead. Morse was courtesy running for Olson the catcher.

Cherry answered with a run in the top of the fourth, but the Panthers added another three-run inning in the bottom of the fourth when Pretasky, Lane and Morse all scored again to make the lead 6-2.

In the bottom of the sixth inning, Bennett slammed a solo homerun for the final run of the game.

At the plate Bennett recorded three RBIs, while Pretasky and Lane scored twice. Both teams recorded only five hits in the game, but the Panthers took advantage of walks, errors and timely hitting.

"I told the guys our game plan was to not let their pitcher get too comfortable," said Weber. "We wanted to make the routine plays, get timely hitting, good pitching and just be aggressive, and when we do that we've been successful."

The win improves the Panthers record to 16-7 on the season, but most importantly puts them into Thursday's championship round where they will have to be beaten twice in the double-elimination tournament.

"Winning and staying undefeated is huge because you can save your pitching," Weber said. "When we come back on Thursday, we need to take the approach that we have to win that first game and we need to take care of business."

Christian Pretasky will get the nod on the mound, with a chance to pitch his squad back to State for a fourth season in a row.

"Our team strength is in our pitching staff," said Weber. "Our top three pitchers are interchangeable and our entire group can go out and win us a game."

The Panthers were scheduled to play at 5 p.m. Thursday, after this issue of the Pine Knot News was printed. If they won, they would head to state. If they lost, there would be a second game immediately following with the winner moving on to the Minnesota State Class A baseball tournament.

UPDATE: South Ridge defeated Ely High School 3-2 Thursday afternoon to win the Section 7A championship, for the fourth time in a row. They advance to the Class A State Championship, which begins Tuesday, June 14 in St. Cloud.