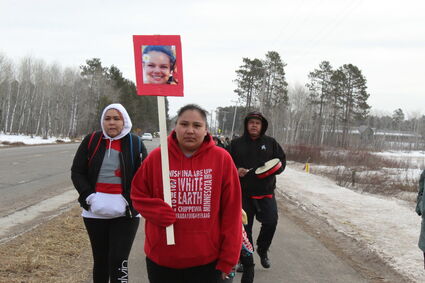 Larissa Bosto holds a photo of her cousin, Jackie Defoe, and Jackie's son, Baby Kevin, on a "walk to remember" held after their murder in March 2020.

Once the jury found him guilty, there was never any doubt that Sheldon Thompson would be sentenced to life in prison for brutally killing his pregnant girlfriend, Jackie Defoe, their unborn child, and Jackie's 20-month-old son, Kevin Lee Shabaiash Jr., in March 2020.

How many life sentences he would be sentenced to was the question.

The sentencing hearing Tuesday at the Carlton County Courthouse came just over two weeks after a jury found Thompson guilty of eight counts of murder on May 31.

Thompson was charged with murder in the first degree-premeditated for the deaths of Defoe, Shabaiash and the unborn child. He was also charged with murder in the first degree while commiting domestic violence with a past pattern of domestic abuse of Defoe and Shabaiash. He also faced two charges of murder in the second degree for Defoe and Shabaiash and murder in the second degree of an unborn child-intent, not premeditated. The first-degree murder charges carried with them a penalty of life imprisonment, while the second-degree murder charges have a maximum penalty of not more than 40 years imprisonment.

The murders were shockingly violent. Jackie Defoe's throat was slashed; she was also stabbed more than 30 times in the back, 60 times in total. Shabaiash was also brutally murdered: his skull and jaw fractured, legs broken, evidence of either strangulation or choking on his own blood in the autopsy.

Carlton County attorney Lauri Ketola argued for three life sentences served consecutively, one after the other, to recognize each victim.

"It's true he only has one life, but he took three," Ketola said.

Defense attorney Steve Bergeson said justice should be "meted out with rationality and a sense of balance" and the sentences should be served at the same time.

"It makes no sense - in any measurement - that someone can give more than one life," he said. "Which is why I ask for concurrent sentences."

In her decision, judge Jill Eichenwald said her decision to sentence Thompson consecutively was an easy one. "The murders were separate and distinct," she said.

"In my head, there's no justification for dealing with [those deaths] on a concurrent basis," she said, stressing that legally consecutive life sentences would not "result in punishment out of proportion to Sheldon Thompson's offenses."

Two people gave impact statements Wednesday at the sentencing hearing for convicted murderer Sheldon Thompson, on behalf of Jackie Defoe's parents, who mourn their daughter and her son, their grandson, and the grandchild who will never be born.

Ricky Defoe addressed the court on behalf of Jackie's father, Garrett Defoe, speaking first in Ojibwe, then in English.

"This violent act turned my life completely upside down," he said, reading Garrett's words directly. But in the more than two years since the murders and with a lot of self exploration, Garrett Defoe said he's "made peace with the great mystery" and found the strength to forgive. Healing will last a lifetime, though.

"I'm at peace knowing my daughter and grandsons are now at home," he said.

Jessica Smith spoke on behalf of Tammy Suomi, Jackie's mother, sitting beside Tammy in the front of the courtroom. She also spoke in Tammy's words.

"The loss of my beautiful daughter and loving grandson has shattered my life," she said, talking about the loss she feels every day and the fact that she would change places with them if she could. "They had so much more life to live. It's a mother and a grandmother's worst nightmare, and I live it everyday."

Ketola told the court how Suomi attended every single hearing, in person or online, over the past two years. "They were my joy and happiness," Suomi said. "I don't know if I will ever feel that joy and happiness again." 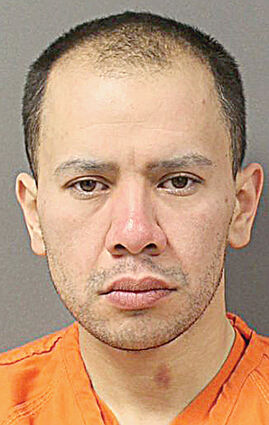 Sheldon Thompson after his arrest in 2020

The county attorney also outlined a much longer list of people impacted by the deaths of Jackie and Baby Kevin, from friends and extended family members, to police who found their bodies, the investigators who scoured the crime scene, domestic abuse counselors, the jury, and more.

"This case has changed everyone it touched," Ketola said.

Thompson chose not to speak at the hearing.

Judge Eichenwald said she hoped he would use his time in prison to accept responsibility and try to make amends, so he could deserve the forgiveness offered by Garrett Defoe, Jackie's father, and make amends to society, even though there will be no possibility of release.

She takes no pleasure in sentencing, Eichenwald said. She does it because the state mandates it and, because "incapacitating Mr. Thompson, removing him from the community, is the only way to keep the community safe."