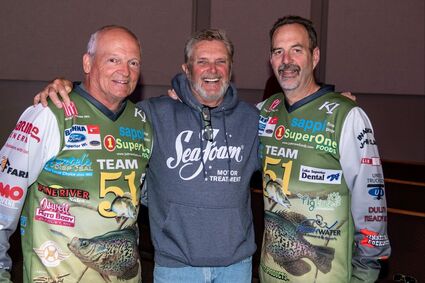 As usual, the top fundraisers for this year's Minnesota Fishing Challenge were Carlton County's own Stu Nelson (right) and Rich Brummer (left), pictured with fishing celebrity Al Lindner. The friends have raised more than $1 million for Minnesota Adult & Teen Challenge.

Rich Brummer said he "got hooked" on the Minnesota Fishing Challenge when he was a charter captain on Lake Superior and participated in the second year of the fishing tournament. The next year he suckered Stuart Nelson into joining him and the two became an unstoppable fundraising team.

"We haven't looked back," Nelson said. "Each team is asked to make some money, and that's what we do. But we've taken it to another level."

Minnesota Fishing Challenge is now the largest fundraising fishing tournament in North America. Anglers this year raised $512,000 for Minnesota Adult & Teen Challenge, with 20 percent of that raised by the two Cloquet friends.

Brummer models their Team 51 shirt - made by K1 Sports in Cloquet - with the logos and names of close to 50 sponsors of all types and sizes, from Super One and Sappi, to Oswell Auto Body and Good Hope Church.

They also have a number of individual donors, including one anonymous donor who matches all the other donations, which has been huge. That person doesn't want to be recognized, though. "It makes a big difference when people know that their donation is doubled," Brummer said.

"There are a lot of kind, caring and generous people out there that believe in the Teen Challenge cause," Nelson said. "We tapped into them, and they're there every year. And we appreciate it. People can spend their money on a lot of things; to have them donate to this is a blessing."

The pair also collect some pretty choice raffle donations - including an original fish painting by Nelson - for which they and other participants sell tickets.

The fishing tournament is held each year on the Gull Lake chain of lakes near Brainerd. Brummer and Nelson enjoy it, but it's not really about fishing for the friends.

The first year they raised $9,300 between them. "It's just grown every year since," Brummer said.

They've raised more than $100,000 every year for the past seven years. With another $118,000 collected this year, the pair crossed a major milestone: reaching a total of $1,025,000 over the past 12 years. They were honored for their accomplishment at this year's banquet June 3. 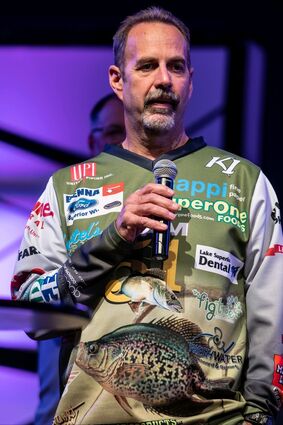 That's a lot of money for treatment, Brummer said, adding that Teen Challenge has one of the highest success rates in the state for addiction counseling. The 13-month program costs roughly $15,000 per person, and all the fishing tournament funds go to help pay for that.

"They come from jail, they hit rock bottom, and they may not have any money," Nelson said.

All the money they raise as Team 51 comes back to the local Duluth Teen Challenge program..

"We want to thank all of our sponsors, everyone for their support," Brummer said.

"'We're so grateful that people have stuck with us," Nelson said. "It's not about us, it's about success for the people in the program."