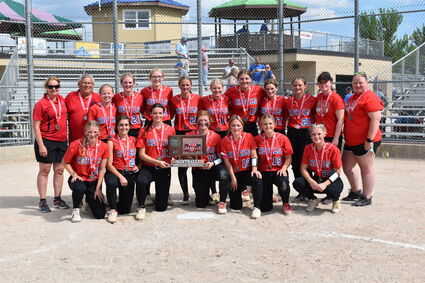 Rebels players and coaches pose with their second place trophy at the Minnesota Class A state tournament last week.

For a couple of heart-racing moments last Friday in North Mankato, Rebels fans thought the wait for a state title was finally over when freshman Sandi Ribich sent a towering fly ball into left center field in the bottom of the eighth inning. Seconds later, Nicollet center fielder Brooklyn Bode snatched victory from the jaws of defeat when she tracked down the near home run ball, crashed into the fence and held on for the catch and the opening out.

Two batters later, the final out was recorded for Nicollet's 3-2 extra-inning win over Moose Lake/Willow River in the Class A softball championship.

"We knew they had strong pitching and we just couldn't quite get the hits together at the right time to score more runs," she said. "Sandi's hit in the bottom of the eighth was oh, so close to being a walk-off home run to win the game. We could see in her eyes and her demeanor that she was putting everything she had into that swing. Nicollet's center fielder made a heck of a catch to save the game for them."

The final inning was the first time Nicollet led the game. Moose Lake/Willow River jumped onto the scoreboard early in the first on a Ribich sacrifice fly after junior pitcher Sarah Christy opened the inning with a double.

Nicollet tied it 1-1 in the top of the third on a sacrifice fly of their own.

The Rebels regained the lead 2-1 in the bottom half of the third when Ribich singled in freshman Hallie Klavu. Two ML/WR errors in the top of the fourth were followed up by yet another sacrifice fly by Nicollet that tied the game at 2.

Both Christy and Raiders senior pitcher Marah Hulke dueled the rest of regulation until the top of the eighth inning, when Nicollet led off with a double by junior catcher Morgan Arndt. After a sacrifice moved Arndt to third, Hulke - who relieved senior starting pitcher Hayley Selby - drove a ball into the corner in right field that was caught, bringing Arndt home on a sacrifice fly for what proved to be the game-winning run.

The Rebels had a chance to go ahead in the bottom of the sixth when senior catcher Natalie Mikrot was hit to start the inning, stole second and reached third on a sacrifice bunt, but she was eventually stranded.

In relief, Hulke pitched five scoreless innings, gave up just one hit, struck out six and walked none. Christy went the distance in defeat, giving up three runs (two earned), seven hits, struck out eight and walked one. She also contributed two hits on offense.

"Of course we were all disappointed to not win that game," Goeb said. "But in our team huddle after the game, we chatted about how the whole community had come out to support us, how we were truly playing in the final game of the season, we had reached our goal of playing in the state tournament, and how absolutely proud we as coaches are of this team and these girls, and how they played their hearts out."

Moose Lake/Willow River had to defeat defending Class A Champion Randolph late the night before just to reach the title game. The Rebels jumped out early again in the first when Ribich belted a two-strike solo home run over the centerfield fence.

"The Randolph game was the most intense game I think I have ever coached," Goeb said. "We went into the game knowing they were the defending state champs. Their fans were so loud and there were so many of them. And then Sandi Ribich hit a home run in the first inning and shut those fans right down."

The game was tied 2-2 until the top of the seventh, when Rebels junior left fielder Hannah Roach sent a fly ball that was misplayed by the right fielder for an RBI double that brought in Kahara from second.

The Rockets led off their half of the seventh with a walk, but the runner was picked off by Mikrot. Two Christy strikeouts later, and the Rebels were in the title game.

In the tournament opener last Thursday afternoon, Moose Lake/Willow River scored a five-run fifth inning on their way to a commanding 8-0 victory over Section 1A champion Wabasha-Kellogg. Christy and fellow junior pitcher Alexis Hoffman combined for the shutout, striking out a total of 10 Falcons batters.

After the championship game, Goeb had a chance for reflection.

"This was one of the most enjoyable seasons I have coached," she said. "This is an amazing group of young women. They have fun together and enjoyed being together, and that showed in their play on the field. They believed in each other and supported each other through every game, not giving up."

Next year will be different, she added, noting they will lose four seniors: Natalie Mikrot, Janna Bode, Maci Kukuk, and Gabby Gamst.

"This team was by far the best defensive team I have ever coached, and our seniors were a huge part of that. We have some younger players that were with us at the state tourney and have a taste for what that level of play is like. Hopefully, getting to state this year will push next year's team to keep working on their defense and hitting so we can get back there.

This team and this group of girls are very special to all of the coaches," she said. "We have talked throughout the season how great they are, how special they are, and what an absolute joy it has been to coach them."

And as usual, the Rebels fan base came through for their team. 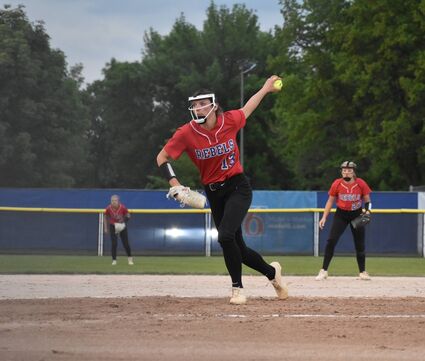 Sarah Christy pitched a shutout in the tournament opener.

"The community support was incredible," Goeb said. "Our collective communities raised enough money for us to take a coach bus, purchase a sweatshirt for every player and provide some meals and snacks for them. That was huge. We were not looking forward to taking a school bus and not having air conditioning after a long day on the field.

"And to send us off and bring us home with a fire truck escort was so appreciated by all of us. And having all the fans at the games and seeing the sea of red shirts along with their chants and

cheers really picked us all up. We are so appreciative to our fans, families and communities for supporting us during this amazing journey."

Ribich and Christy were voted to the Class A softball all-tournament team following the championship game. Voted to the regular season all-state team from the Rebels were Christy (second team) and Klavu (honorable mention).