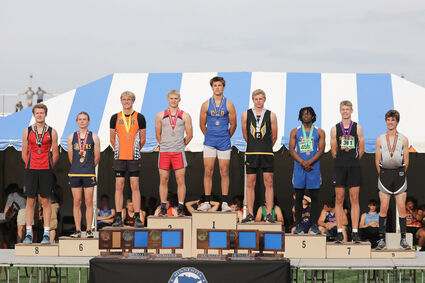 Esko's Makoi Perich stands on the podium as the Class A championship in the long jump Friday at St. Michael/Albertville High School.

"Makoi was excited to compete in the state meet after exploding for a last-attempt state-qualifying leap of 22 feet, 3.5 inches at sections," said Esko boys coach Gary Beaudot of the highly competitive sophomore. "He was the top seed coming in, and was hoping to go even farther at state. Instead, he was Mr. Consistency as four of his six jumps were over 21 feet. His second attempt in prelims was best at 21 feet, 5.75 inches. He was happy winning, but definitely not satisfied with his distance."

Esko had other big finishes in the state meet including Makoi's older brother, Mason Perich, who finished seventh in the 100-meter dash, but worse for the wear.

"Mason was definitely struggling getting warmed up for the 100 after long jumping," Beaudot said. "He felt tight and sore, and seemed to not quite be 100-percent. A late reaction to the gun at the start put him in catch-up mode right away in the race. As he neared the end of the race the tightness was obvious, and he reached for his hip as he decelerated through the finish line. 11.22 was not what he was hoping for after running 10.96 in his prelim."

Mason's injury played a major factor in the 4x100 relay event. The Eskomos were in a fight for first place only to have Mason Perich pull up with an injury during what would have been the final 100 meters. Minneapolis North won the event in record time.

Makoi Perich also took sixth in the triple jump, completing an impressive day for him.

"In the triple jump Makoi showed great consistency," said Beaudot. "He recorded five legal jumps between 41'9.75" and 43'2.75". His sixth-place finish and personal best by a foot was quite an accomplishment for a first-year triple jumper"

The Esko girls team also had an impressive day at the Class A state meet, with the 4x100 relay team of Emily Rengo, Kaitlynn McConnell, Tegan Erickson and Gwen Lilly finishing fourth.

"I am so proud of this group of girls," said girls coach Matt Peterson. "Another school record broken at the state track meet, the girls broke our school record in prelims on Thursday night with a time of 50.44. In the finals on Friday the girls finished in fourth place, earning All-State honors."

Rengo was doubly impressive by taking fifth in the 100-meter dash, McConnell was seventh in the long jump and Whitney Hanson broke the school record in the triple jump and finished in seventh place at state.

"Rengo has been the rock of our girls program the last two seasons," said Peterson of the graduating senior. But he's optimistic about the future of the jumping program.

"The long jump is an event where I strongly believe Kaitlyn is going to make tremendous gains in the next few seasons, which is extremely exciting. Once she finds consistency with the overall approach of the event the sky's the limit for her. As far as Whitney goes, it's always exciting to see a school record broken, but it has a special quality to it when it's done at a state track meet. Then you add on the fact that Whitney is only an eighth-grader, and wow, it's just an exciting achievement for her."

The Cardinals had an impressive performance by Noah Foster, who finished fourth in the 1600-meter run with a time of 4:26.84.

"Noah really wanted to break the school record, but the pace went out slow and he ended up just missing the school record by one second," said head coach Dave Foster, who is also Noah's dad.

"We knew Noah would run with the leaders and he was hoping the pace would be fast so he could break [that] school record," he said.

The Rebels also had some excellent finishes at State, led by 800-meter runner Joe Mikrot, who ran an impressive time of 1:56.56, coming in just a second-and-a-half off the lead. His time was good enough for a fourth-place finish and Mikrot set a school record in the process.

"He went into the state meet wanting to set the school record," said assistant coach Adam Whelan. "He followed his plan and broke the school record in the prelims by a little less than a second and then he ran a great final to further improve the record."

The Rebels 4x100 boys relay team of Jackson Thompson, Chase Clausen, Jaxsyn Schmidt and Kaden Robbins raced to a time of 44:32, which was good for seventh place. 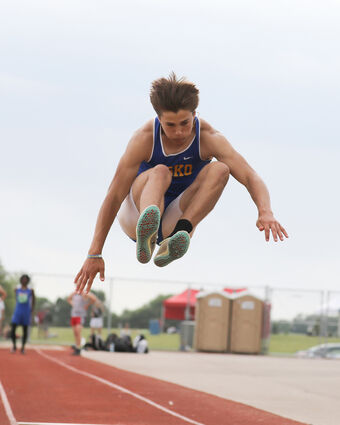 "Our relay team wanted a shot to make finals and knew they'd have to break the school record to do it," said Whelan. "They achieved the school record in the prelims, and then in the finals they did like Joseph and improved on that time."

Thompson also had a big day in the pole vault where he finished seventh with a vault of 12 feet, 6 inches.

"Jackson had a great season," said Whelan. "He actually had to leave the vault to run in the 4x100 relay at a height just under his PR so that made for a difficult situation to return to."

The South Ridge Panthers got a strong performance from senior Tony Cummins, who made the finals and finished eighth in the 300-meter hurdles.

"Tony had an excellent performance," said Jeremy Polson, head coach of the Panthers. "He set a personal best in the prelims to get the last qualifying spot by four-hundredths of a second."